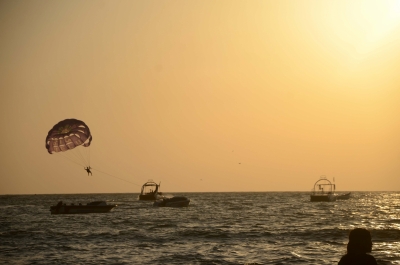 Panaji: While prohibiting unauthorised selling of water sports tickets, the Goa government has warned to take action against those who offer packages to tourists outside Goa in places like Malvan in Maharashtra and Karwar in Karnataka.

The order issued by the Tourism department states that violator shall be punishable with fine of Rs 5,000, which may extend up to Rs 50,000 or shall be liable for action under Section 188 of Indian Penal Code.

Sources informed that some touts persuade tourists visiting beaches of Goa by offering them sea ride packages in neighbouring states.

Stating that Goa faces challenges in tourism from Sindhudurg belt (in Maharashtra) and from Karnataka border, Tourism Minister Rohan Khaunte had earlier said that his department is rightly putting steps to promote water sports and eradicate illegal touts, so no tourists are affected.

“If we don’t act right, then we may suffer with regards to tourism. Tourists may start going to neighbouring states,” Khaunte had said.

On many occasions, Khaunte stated that he had put steps to eradicate touts and illegal activities from beaches of Goa and tourism spots. On Monday, his department issued order in this regards.

Maharashtra Assembly Speaker Rahul Narwekar, who visited the state recently had said that Mopa airport coming up in north Goa will also benefit Maharashtra for tourism.

“Mopa airport will be beneficial to the people of Goa as well as to Maharashtra as it is on border of both the states. It will be a gateway to tourism. From Vengurla to North Konkan (in Maharshtra), there are many tourism spots. This airport will help to develop these spots,” he had said, adding this project is very important.

The distance between Mopa airport to Vengurla in Maharashtra is nearly 43 km.