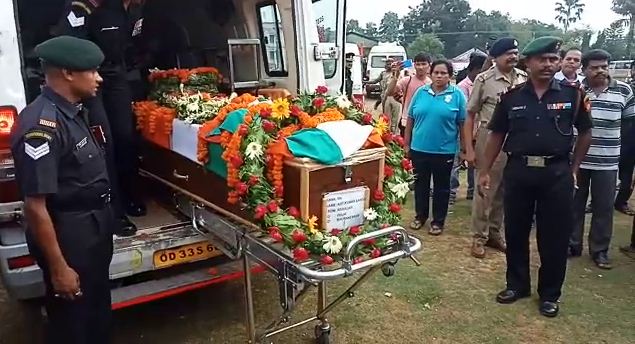 Dhenkanal: Badasuala village in Odisha’s Dhenkanal district today bid a tearful adieu to son of the soil Ajit Kumar Sahoo, who was martyred in an IED blast by militants in Jammu and Kashmir’s Pulwama district.

Mortal remains of the martyr were consigned to flames with full state honours as the atmosphere reverberated with chants of ‘Saheed Ajit Sahoo Amar Rahe’ by locals.

Earlier, the body reached the Biju Patnaik International Airport (BPIA) in Bhubaneswar late last night. It was later taken to the 120 Infantry Battalion campus, where the slain jawan was given guard of honour.

The coffin was then taken to Dhenkanal Mini Stadium and later to his village in a grand procession, during which thousands of people had last glimpse of the brave hero.

Sahoo had died after sustaining injuries in an IED blast by militants in Jammu and Kashmir’s Pulwama district. He had joined the Indian Army in 2015. On the fateful day, militants had attacked a truck carrying Indian Army troops with a car-borne improvised explosive device (IED).

Odisha schools to be rewarded for quality education