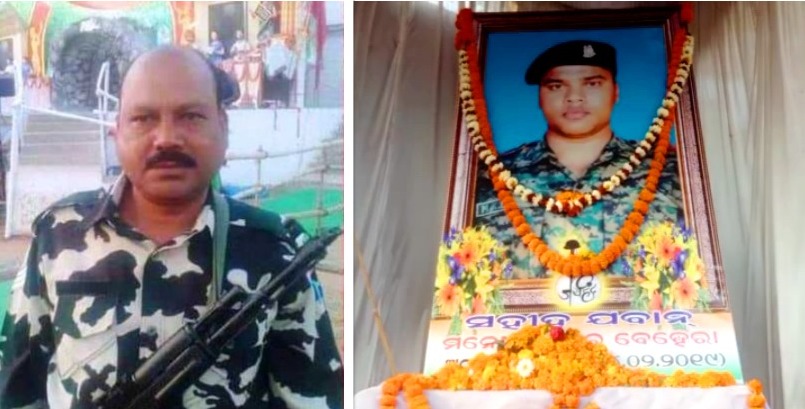 Jagatsinghpur/Cuttack: Tears rolled down the eyes of many in Shikhar village of Jagatsinghpur district and Ratanpur village in Cuttack district after mortal remains of the two Odia CRPF Jawans, who were martyred in Pulwama terror attack on February 14, were consigned to flames with full state honours.

Hundreds of people from all walks life, including Government officials and patriots walked to the funeral grounds to pay their last respect to the two bravehearts – Manoj Behera of Ratanpur and Prasanna Sahu of Shikhar.

The atmosphere was emotionally surcharged in both the villages with chants of ‘Bharat Mata ki Jai’, ‘Bande Mataram’ and ‘Shaheed Jawan Amar Rahe’, when the mortal remains of the departed souls were taken to the funeral grounds in a grand procession.

Later, the villagers bid a tearful farewell to the two bravehearts after the funeral pyres were lit by the inconsolable family members of the two martyrs.

The Central Reserve Police Force (CRPF) contingents and Odisha Police gave a guard of honour to the two martyrs ahead of last rites, attended by ministers, political leaders and local officials along with hundreds of people.

Earlier in the day, the two CRPF Jawans were given a guard of honour from the CRPF and State Police at the Biju Patnaik International Airport in Bhubaneswar after their bodies arrived in a special aircraft.