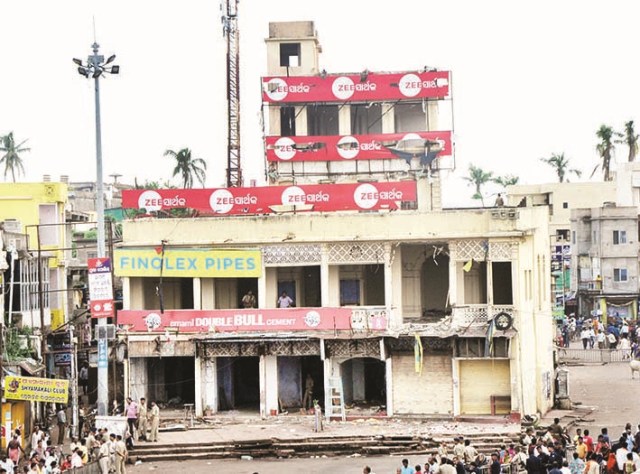 Puri: As part of ongoing eviction drive around Srimandir in Puri, the razing of age-old Emar mutt situated in the south-eastern corner of Jagannath Temple began by the district administration today.

The Emar mutt, which had been in service of Lord Jagannath for centuries, was finally bulldozed in presence of district magistrate and over 30 platoons of police forces despite protest and objection by some experts.

Along with over 900-year-old mutt, the historic Raghunandan library and shops built near it, will also be demolished to clear Meghnad Pacheri (boundary wall) of Srimandir.

However, the library be relocated to other location and will have a world-class makeover.

“Initiative will be taken to make Raghunandan library as world-class library after relocation. All the ancient scripts and books will be preserved and the set up will be technology driven,” informed Puri Collector Balwant Singh.

On Tuesday, the 300-year-old Languli mutt was evicted in ongoing drive around Srimandir in Puri.

Like Languli and Emar mutts, other mutts situated within 75 metre from the temple wall will also face the same fate in upcoming days.

Worth mentioning, Puri administration launched the eviction drive to ensure safety and security of Srimandir as well as pilgrims. The move came after a proposal to this effect was approved by Chief Minister Naveen Patnaik at the Cabinet meeting on August 16.

However, some experts raised concern over the government’s move to beautify the temple’s periphery saying the demolition drive will affect services of Lord Jagannath as well as the rich culture and heritage of Puri.