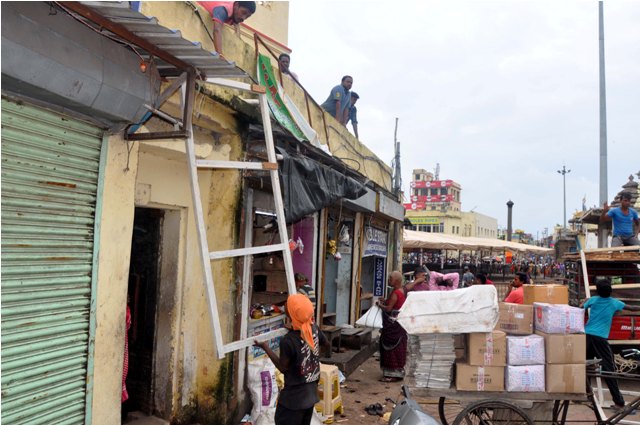 Bhubaneswar: A delegation of Sri Jagannath Temple servitors and Congress leaders on Tuesday Sought Odisha Governor Ganeshi Lal’s intervention into the eviction drive near the shrine, contending that shops and houses were being razed without any rehabilitation plan.

The district administration of Puri has decided to bring down all structures within 75 metres from the temple boundary wall in view of its security.

“We have met the governor and urged his intervention, as the state government has started eviction of shops, business establishments and other structures without notices. The local people and traders want proper rehabilitation before eviction,” said Binayak Dasmohapatra, a servitor of Puri temple.

Senior Congress leader Amiya Kumar Patnaik said they were forced to seek the governor’s intervention, as the administration started the eviction drive without plans of rehabilitation.

Puri Additional District Magistrate B K Das, however, said the state government will rehabilitate the affected persons and traders. “We have identified space in the municipality market and other places for the traders,” Das said.

Chief Minister Naveen Patnaik had on August 23 made an appeal to people to cooperate with the state government in the drive to demolish houses, shops and other structures near the 12th century shrine. The Puri District administration has already razed all unauthorised structures adjacent to the temple boundary wall. Thirty platoons of police force, personnel of the Odisha Swift Action Force (OSAF) and 21 magistrates are present at the spot of the eviction drive, officials said.