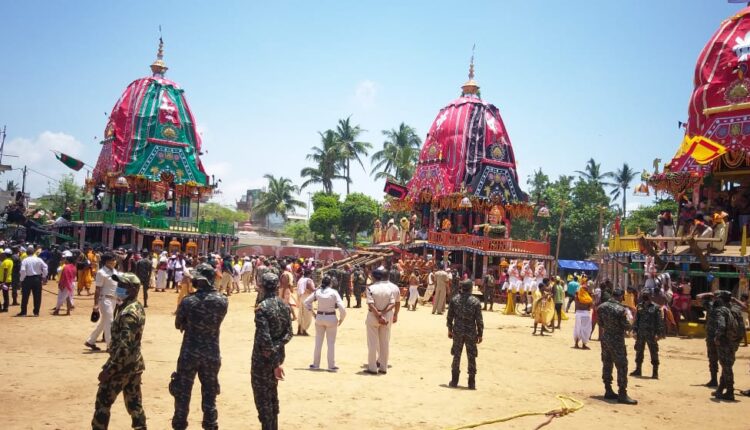 Puri: The ‘Bahuda Jatra’ concluded as the three chariots of Holy Trinity reached in front of Shree Jagannath Temple in Puri today afternoon. After completing their nine-day stay at Gundicha Temple, Lord Jagannath, Lord Balabhadra and Devi Subhadra on their respective chariots reached near the Singhadwara by 4:35 PM.

The ‘Laxmi Narayan Bheta‘ ritual was performed for 20 minutes near Puri Gajapati’s palace, ‘Shrinara’ during the return of Lord Jagannath.

In view of the COVID-19 guidelines, ‘Sunabesha’ of the Holy Trinity will be held on their respective chariots. As per the schedules decided by the Srimandir Temple Managing Committee, the ‘Sunabesha’ will start from 4 pm till 11 pm.

After the completion of the ‘Adharapana’ ritual on Friday, the deities will return to the sanctum sanctorum of Srimandir during ‘Niladri Bije’ rituals on July 4.