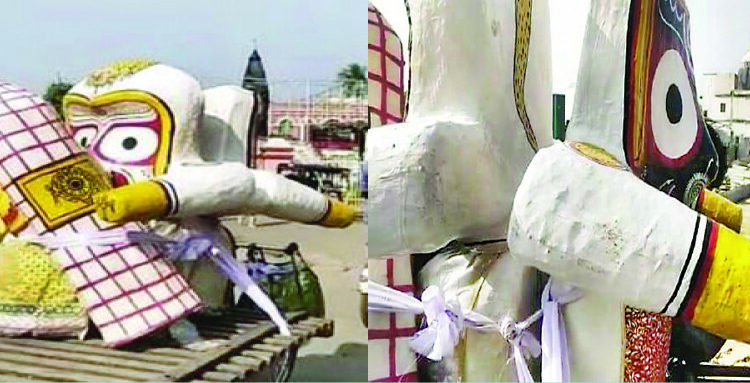 Puri: Idols of Lord Jagannath and His siblings Lord Balabhadra and Devi Subhadra were carried on a trolley in an objectionable manner on Bada Danda in Odisha’s Puri town, yesterday.

According to reports, the trolley driver was seen carrying the idols on the three-wheeler by tying them.

On being questioned, the driver said he was asked by the owner of a tent house to carry the idols from a cultural event at Bali Sahi here.

While some devotees advised him to cover the idols with clothes, he paid no heed and left the place with the trolley.

Expressing displeasure over the matter, devotees have demanded that the tent house owner should apologise for the incident.

Earlier in September, an idol of Lord Jagannath was carried on a truck in an objectionable way in Jaleswar area of Balasore district.

The idol was tied to the rear part of the bamboo-laden truck with a rope while being transported to West Bengal from Balasore.

As the vehicle was heading towards the destination on NH-60, two persons travelling in a car noticed the incident and reprimanded the truck driver.

They also recorded a video of the matter, which went viral on social media platforms drawing sharp criticism from various quarters.

The owner and workers of the tent house, which was transporting the idol, apologised for the incident. They visited Jagannath temple to seek forgiveness for the act.