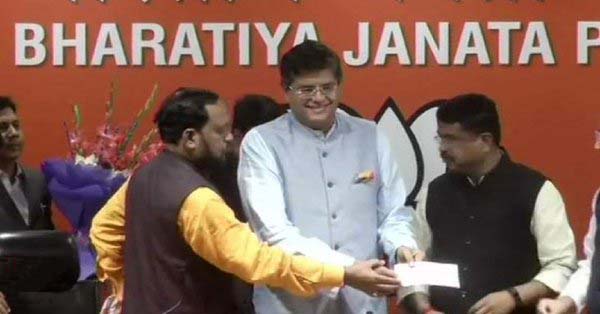 The industrialist-turned-politician went to BJP national president Amit Shah’s chamber where the duo held a discussion after the induction.

“Baijayant Panda’s induction to BJP is a signal towards party’s growing strength in Odisha. BJP will definitely benefit from this,” Union PNG Minister Dharmendra Pradhan said on this occasion.

Pradhan then invited Panda to address media on the occasion.

“I accept the leadership of Prime Minister Narendra Modi and BJP national president Amit Shah and I believe their leadership will take India forward. It is no secret that I have admired Prime Minister Narendra Modi’s leadership and the direction in which he is taking the country and the national president of the BJP Amit Shah ji’s leadership that has made the party not just the largest in the country but the most effective political party in the whole world,” Panda said after the induction programme.

“We have a situation in Odisha where governance has very sharply deteriorated in recent years. In the early years, when it was an ally of the BJP there were certain norms that had been followed which have all been lost in recent years. You have seen the extremely high rise in crimes, especially against women and children, extremely high levels of corruption. After a very long period of four terms of continued rule by one party you can see the situation where pregnant women and people that have passed on had to be carried on shoulders across rivers that don’t have bridges, and many other such very disappointing sights. This needs changing and only the Bharatiya Janata Party is capable of doing this. Prime Minister Modi has demonstrated that he is capable of taking extremely difficult and tough decisions which are in the long term interest of the country. Whether they be economic or you have seen in very recent times whether they have to do with the defence of our nation against the scourge of 30 years of terrorism,” he added.

Panda was touted to join the saffron party ever since he fell from the grace of BJD supremo Naveen Patnaik.

The former Kendrapara MP courted controversy on numerous occasions for his opinion pieces in national newspapers praising Prime Minister Narendra Modi and criticizing the style of functioning of Naveen Patnaik.

The 55-year-old leader, who claimed to be one of the founding members of the BJD, alleged that the party had deviated from its original ideology and the government was being run by bureaucrats.

In January last year, Panda was suspended form the party for “anti-party” activities.

The cold war between the supremo and the parliamentarian reached heights when none from the BJD was in attendance at the funeral ceremony of his industrialist father Bansidhar Panda.

Couple of days later, he resigned from the primary membership of the party and also sent his resignation to Lok Sabha Speaker Sumitra Mahajan.

“It’s with deep anguish, hurt and sorrow that I have decided to quit the politics into which our BJD has descended,” Panda wrote in his letter to Naveen Patnaik.

Grapevine had it that Panda, who had resigned from BJD on May 28, 2018, was in touch with BJP national leadership and will join the party anytime soon.

Panda, however, reacted to the developments saying “he would take right decision at right time”. It was also speculated that he would form an outfit on his own and go alone in the forthcoming elections.

Almost akin to PM Modi’s Chai Pe Charcha, he toured across the length and breadth of the state and organized several Heijau meetings over cup of tea to elicit views and tap the mood of the people.

Meanwhile, both the BJD and Congress said Panda’s move will have no impact on the fortune of their respective parties in the upcoming polls. “It is his personal decision to join the (BJP) party. Only time will tell how justified his step was,” said BJD leader Arun Sahoo.

Odisha Pradesh Congress Committee President Niranjan Patnaik said “it would have no impact on Congress.”

None on other side would have survived if we had Rafale: Modi