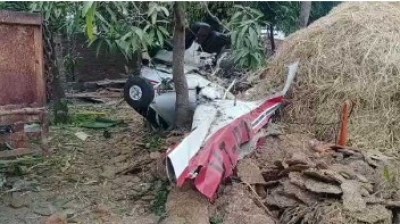 Bhopal: A private trainer aircraft crashed after it collided with the dome of a temple in Madhya Pradesh’s Rewa district, killing the pilot, police said on Friday.

The crash that occurred at about 11.30 p.m. on Thursday night also left a trainee pilot injured, who has been admitted in Sanjay Gandhi Hospital in Rewa, located about 400 km from the state capital Bhopal,

The aircraft crashed 3 km away from the Chorahta airstrip after hitting the dome of a temple and a tree while on a training sortie, the police said.

The deceased pilot has been identified as Vishal Yadav (30) and the trainee pilot is Anshul Yadav.

“The plane collided with the temple during training, one pilot has died, and the other is injured and is being treated at Sanjay Gandhi Medical College,” Navneet Bhasin, SP, Rewa said.

Rewa District Collector Manoj Pushp said a probe is underway into the crash.