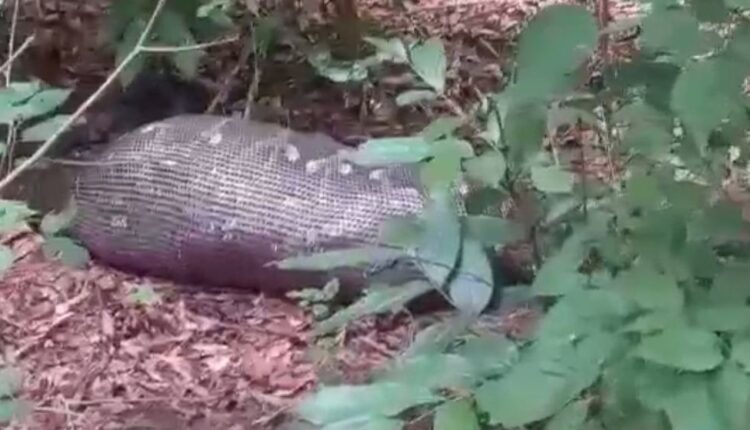 Cuttack: Reminding us the bone-chilling scenes of Hollywood adventure-horror movie Anaconda of late ‘90s, an elderly woman of Banki area of Odisha’s Cuttack district has claimed that a python swallowed her husband. The incident is being claimed to have happened inside Dampada-Chandaka sanctuary a few days ago.

Saraswati Behera (73) of Thoriapatana village under Mundali panchayat claimed that her husband Nanda Kishore Behera’s chappals, clothes and moped were found within 800 metres from a python inside the sanctuary. Nanda Kishore (77), a hawker, went missing while he was travelling to a village, located close to the sanctuary, six days ago.

The villagers claimed that the large reptile has swallowed something big in the sanctuary and it was unable to move anywhere.

According to sources, the police along with the Forest department officials had recovered Nanda Kishore’s chappals, clothes and moped during a search operation. His family had lodged a missing complaint with Banki police.

However, officials of the Forest department have rejected Saraswati’s claim and pleaded that a python could not swallow down an adult/grown-up person. “The python might have swallowed a wild animal,” said Dampada Ranger Biraj Das.

The villagers, meanwhile, have threatened to launch an agitation if the police and Forest department fails to solve the mystery regarding Nanda Kishore’s disappearance at the earliest. They alleged that the Forest department has not been showing any urgency to trace the septuagenarian hawker.

“Nanda Kishore had trespassed into the sanctuary. We have searched a lot to trace him. His moped and other belongings have been recovered,” said the Dampada Ranger.