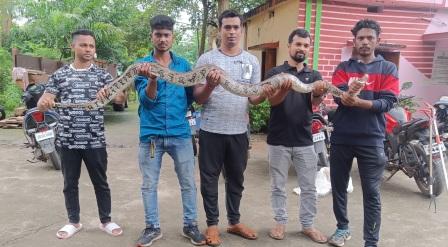 Malkangiri: An eight-ft long python was rescued at MPV-8 village under Chitrangpalli panchayat of Kalimela block in Malkangiri district today after it swallowed three chickens from the house of a villager.

The reptile, weighing around 20 kg, slithered into the villager’s house in the morning and swallowed three chickens from their pen. On being informed, members of Snake Helpline reached the spot and rescued the python, sources said.

The python was later handed over to the Forest department officials.

“The python might have slithered into the villager’s home from the nearby forest.  We have released the reptile to its natural habitat after examining its health condition,” said an official of the Forest department.

Odisha: Farmer among six held over tusker death in…