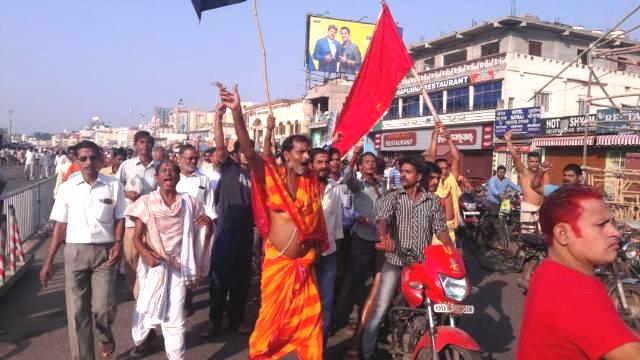 Puri: Protest against Dhadi Darshan (queue system) at Srimandir here intensified as members of Shree Jagannath Sena along with locals went berserk while observing a 12-hour bandh in the pilgrim town today.

As part of the protest, the angry activists barged in and ransacked the the house of Revenue Minister Maheswar Mohanty today. They also hurled stones at Puri SP Sarthak Sarangi’s residence and vandalized the office of the Shree Jagannath Temple Administration (SJTA).

Sources said Jagannath Sena today resorted to a dawn-to-dusk bandh today to protest the queue system at the centuries-old temple. The situation turned violent after police took convener of the outfit Priyadarshan Patnaik this morning.

The agitators staged a road blockade on the Bada Danda (Grand Road) by burning tyres bringing vehicular movement to a grinding halt. Besides, the protesters including servitors broke barricades near the Singhadwara and attempted to barge into the temple.

Earlier in the day, Jagannath Sena activists resorted to a 12-hour bandh here today opposing the queue system for Darshan of deities at the Srimandir.