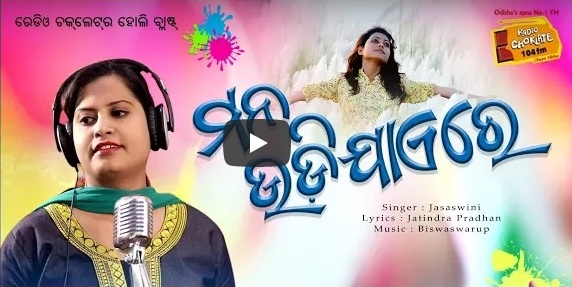 Bhubaneswar: To mark the fun-filled and boisterous Holi festival, the numero uno private FM station of Odisha, Radio Choklate 104 FM has launched a music video adding to the celebration of the festival of colours.

Japanese tourists soak in colours of love in Odisha capital

The studio version of this song has been well-received on social media and gained appreciation of listeners, as well. This is the first time that Radio Choklate has released a song in the form of a music video on Holi. “It’s a refreshing song that expresses the feelings of young girl in love in the cheerful season of spring. The catch phrase ‘Mora Mana Udi Jaaye Re’ not only adds a zing, but is also a tribute to the classic version of the popular song ,” said RJ Sangram, the programming head of the radio station.

Titled ‘Mana Udi Jaaye’, this peppy number has been sung by Jasaswini on the lyrics penned by Jatindra Pradhan. Biswaswarup has composed the music, with sound mixing by Smruti Ranjan Samal under the creative supervision of RJ Sangram.

Cabinet approves bill to seize all assets of ‘Fugitive Offenders’

Safe, herbal Holi to be central theme of Patha Utsav on Mar…