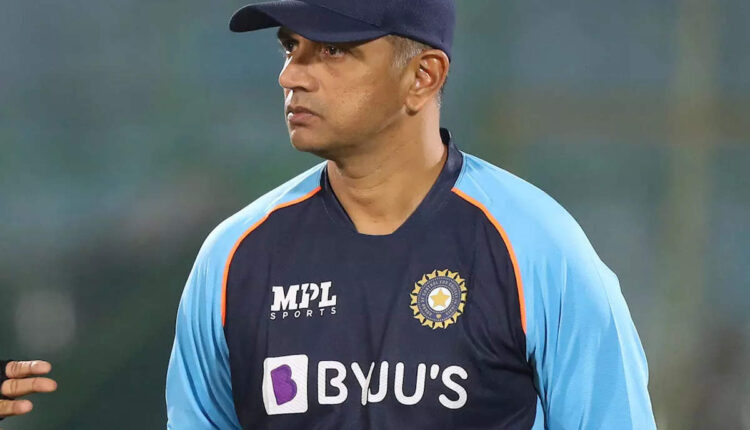 New Delhi: Former India cricketer and a member of the Australian coaching staff, Sridharan Sriram feels that Rahul Dravid being made chief coach of the Indian side is the best thing to happened to the country’s cricket, adding that the team will benefit immensely from his methodical planning and preparations.

Sriram, who has played alongside Dravid, also felt that the sooner Australian cricket comes out of the sexting scandal — which led Tim Paine to quit as captain less than three weeks before the Ashes — the better it will be for the side as the five-Test series against arch-rivals England begins on December 8.

“It (Dravid being appointed coach) is only very good for Indian cricket. For the talent that India have got, to have someone like Rahul who has been through it, done it, who has come up the hard way, he knows the value of the India cap, it will instil the pride to play for India,” Sriram, a left-handed all-rounder who played eight ODIs, told cricketnext.com.

“Ravichandran Ashwin has nailed it on the head saying about the process and about enjoying the journey more than the results. His (Dravid’s) planning and preparations will be very methodical, to the point, a lot of planning will go into it, he will leave no stone unturned and will tick all the boxes when it comes to preparation. Players could not have asked for more.”

The 45-year-old Sriram, who saw Australia lift their maiden T20 World Cup in the UAE defeating New Zealand and within a few days witnessed the low of Test skipper Paine relinquishing captaincy in the wake of the scandal, added that Dravid “really bleeds blue”.

“Having known Rahul, he will try to bring in a calm and steady atmosphere, instil good values and pride to play for the India cap. He really bleeds blue. The way he represented the country, he will instil these values in the team. He will do all the background work in terms of preparations, be very hardworking like the way he played the game,” added Sriram.

Sriram, who is currently strategising Australia’s Ashes preparations after the successful T20 World Cup campaign, said that everyone was aware of his role going into the World Cup, which played a big part in Australia winning the title.

“What happened this time was that we were very clear on our strategy, how we were going to approach the World Cup, the roles everybody has got. There was a lot of clarity leading into the World Cup. Even though a lot of the players were not part of the last two series before the World Cup, in the West Indies and Bangladesh, it was very clear what role a Glenn Maxwell or a Steve Smith would play, what role we had for Mitchell Marsh or for that matter for David Warner and Aaron Finch. We knew the exact positions where everybody was going to play and the roles we expected them to execute,” said Sriram.

He said that the confidence level in the side was very high after the T20 World Cup win and team had got a boost ahead of the Ashes.

“The confidence level is very high. It is also a very important series for England, don’t forget that… It is very disappointing for everyone (the Tim Paine episode). As a team, Australia have to deal with it. To come out of it, given the importance of the (Ashes) series that is coming up, the quicker they deal with it, the better. Given the space in which Australia is, they will come out of it quicker,” he added.