Railway projects in Odisha will be given priority: Ashwini Vaishnaw 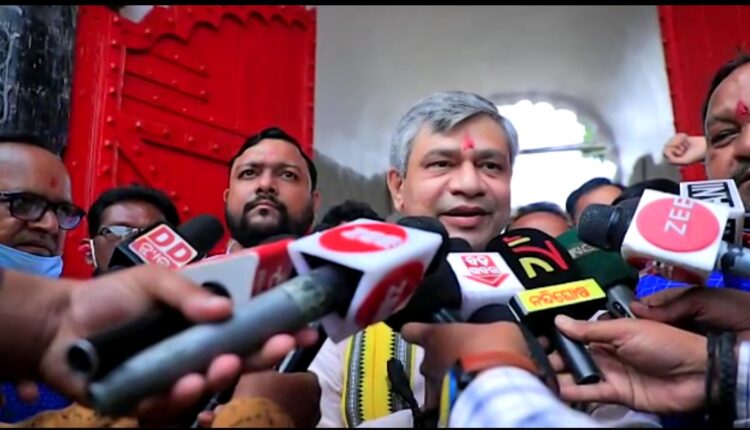 Ballangir: Ongoing Railway projects in Odisha is being given priority for speedy construction work and early completion, informed Railway Minister Ashwini Vaishnaw during his visit to Balangir today.

Work for Khurda Road-Balangir Rail Line is being constructed from both the end for early completion of the project. Construction work from Bichhupalli to Sonepur and from Mahipur to Nuagaon/Dasapalla is in full swing.

Speaking to media, Railway Minister Ashwini Vaishnaw said that, to complete the project, we need cooperation from all agencies.

On a demand on Balangir-Nuapada Rail Line, Vaishnaw said that it will be reviewed in appropriate level and keeping on the feasibility on this, further action will be taken.

Vaishnaw also said that, Loco overhauling at Narla will be given priority.

Railway Minister also interacted with trackmen at Balangir Railway Station and praised their works in every odd conditions.

Railway Minister also inspected the ladies waiting room, interacted with station master, enquired about land on other side of PF-3 and reviewed other amenities.

Inspecting the toilets at 2nd Class waiting hall and reviewing the cleanliness at Station, Minister praised the Station authorities for cleanliness. Apart from this, he also inspected tea stall and other stalls at Station. Railway Minister told that it is their responsibility to keep his area clean at Station.

Railway Minister also Interacted with people sitting on benches and took feedback from them.

Informing about the purpose of visit to the region, Vaishnaw said that, he moved around KBK region and saw the problems and issues and promised to work towards the development of the region.

The Minister boarded Durg-Puri Express for Bhubaneswar, at night.