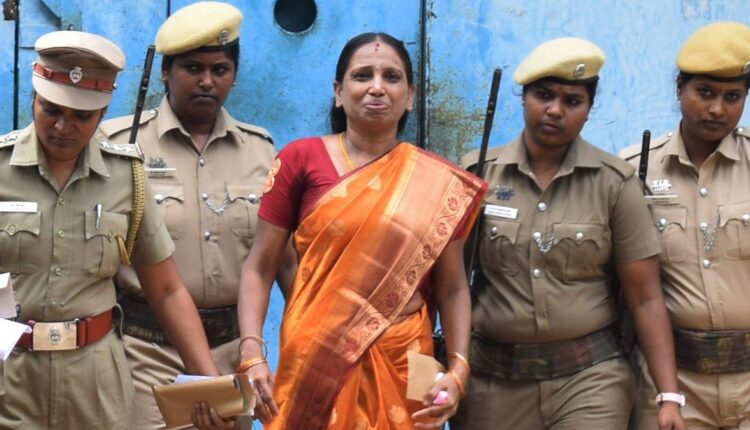 Chennai: The Tamil Nadu government on Thursday granted one-month parole to Nalini Sriharan, one of the seven convicts in the assassination case of former Prime Minister, Rajiv Gandhi.

The parole came after repeated requests from her ailing mother Padma.

State Special Public Prosecutor, Hassan Mohammed Jinnah informed the Madras High Court on Thursday that the state government has granted one month ordinary parole to Nalini who was lodged in Vellore Special Prison for Women.

His response came as Padma’s petition for parole of her daughter came up before a bench of Justices P.N. Prakash and R. Hemalatha. Recording the submission of the Special Public Prosecutor, the division bench closed the petition of Padma, according to her lawyer, M. Radhakrishnan.

Nalini will be staying at a rented accommodation at Satuvachery in Vellore under tight police security with her mother Padma, her sister Kalyani and her brother Bakianathan just like she did while she got parole in 2019.

The Tamil Nadu cabinet had in 2018 recommended the release of Nalini and her fellow convicts but the Governor did not clear the file. She and other convicts in Rajiv Gandhi assassination case have filed a petition in Madras High Court to release them without the consent of the Governor and it is also pending before the court.

Nalini, along with her husband Sriharan, who is a Sri Lankan national, has been under imprisonment three weeks after the assassination of Rajiv Gandhi on May 21, 1991, at Sriperumbudur.

Process for recruitment of 11,403 teachers begins in Odisha