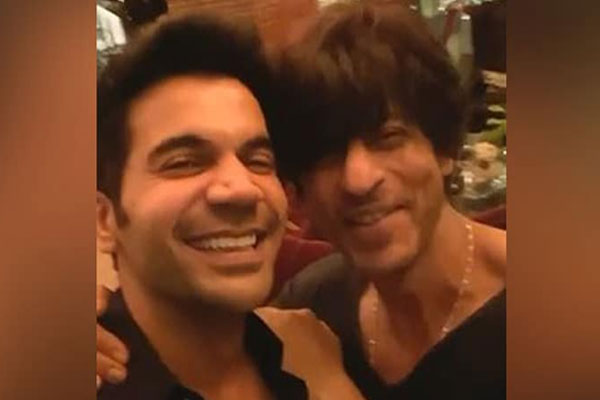 Mumbai: Actor Rajkummar Rao had a fanboy moment when superstar Shah Rukh Khan recited his dialogue from the hit film “Stree” and kissed him.

Rajkummar took to Instagram to share a small video from their meeting, wherein Rajkummar is seen blushing as SRK plants a kiss on his cheek.

Since childhood I’ve been saying his dialogues. What a wonderful feeling when he decides to say my dialogue this time. There’s is no one like you @iamsrk sir. You’ve inspired me to become an actor. Biggest fan ever. ❤️❤️❤️ #Stree

The actor, who considers Shah Rukh as his inspiration, is on cloud nine and elated in the clip, wherein SRK is seen mimicking a dialogue of Rajkummar’s horror comedy “Stree”.

In the funny video, Shah Rukh is seen saying “Vicky, please” along with Rajkummar.

“Since childhood, I’ve been saying his dialogues. What a wonderful feeling when he decides to say my dialogue this time. There’s is no one like you SRK sir. You’ve inspired me to become an actor. Biggest fan ever,” Rajkummar posted on Instagram with the video.

“Stree” director Amar Kaushik was quick to respond with a comment “Wahhhh. Love this”. To which, Rajkummar replied: “I wish you were there Bhai.”

Rajkummar was last seen in “Made In China”, which is a hilarious take on a struggling Gujarati businessman and the bizarre journey he undertakes to become a successful entrepreneur. It is directed by Mikhil Musale, and also stars Mouni Roy and Boman Irani.