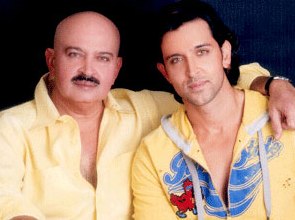 Filmmaker Rakesh Roshan has announced the fourth installment of the popular science-fiction superhero franchise “Krrish”. It will once again star his son and actor Hrithik Roshan as the masked hero.

“When my wife showed me a tweet with Bappa’s picture as ‘Krrish’, it reaffirmed my belief that ‘Krrish’ is the original superhero we have. It boosted my confidence and inspired me to make the fourth installment,” Rakesh said in a statement.

He captioned the image: “Ganpati blessings for ‘Krrish 4’… Hope everyone is enjoying the festivities. Love to all.”

The movie is slated to go on floors next year and will be released during Christmas 2018.

The franchise began with “Koi… Mil Gaya” in 2003, which starred featured Hrithik, Preity Zinta and Rekha in lead roles.

In other news, Rakesh’s “Kaabil” starring Hrithik Roshan and Yami Gautam, and directed by Sanjay Gupta, will be hitting the screens on January 26, 2017. (IANS)

I’d rather be acting than playing myself on TV: Kalki Koechlin