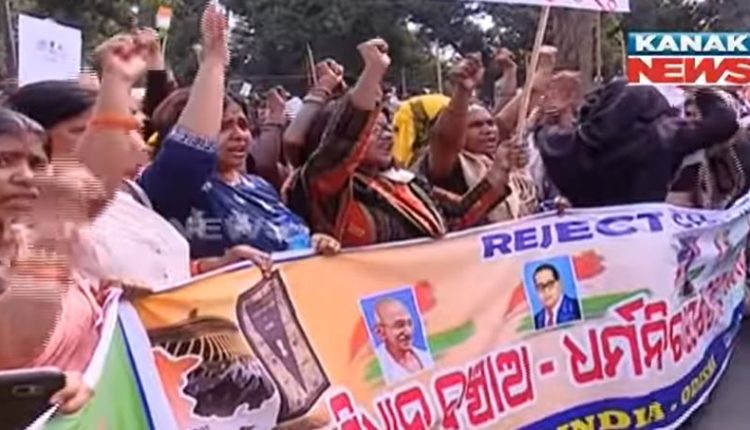 Bhubaneswar: Odisha on Thursday witnessed two parallel agitations, one against the Citizenship Amendment Act (CAA), National Register of Citizens (NRC)and NPR (National Population Register), and another in support of them.

While a number of social organizations supported by the Congress and the Left parties under the banner of “We the People of India” staged an agitation against CAA, NRC and NPR in the state capital here, another rally in support of them was organized at Puri town.

Both the rival groups held the rallies in the name of “Save Democracy and Save Constitution” on the 72nd death anniversary of Mahatma Gandhi.

People from different sections of the society including members of the Muslim community took lead in the rally in Bhubaneswar.

The speakers at the anti-CAA rally accused the BJP of attempting to divide the nation in the name of the new legislation. The participants read out the Preamble to the Constitution on the Mahatma Gandhi Marg here and pledged to fight against the legislation which according them aims at “dividing” the nation.

In a memorandum to Chief Minister Naveen Patnaik, the “We The People of India” said: “We urge you to take a clear and unambiguous stand on opposing CAA and refusing to implement the dangerously linked NRC and the NPR.”

In the parallel rally held at Puri, BJP state president Samir Mohanty and party’s national spokesman Sambit Patra defended the CAA and raised questions on the intention of the Congress and Left party leaders for holding a demonstration in Bhubaneswar.

“The prime minister and the Union Home Minister have categorically said that the CAA is meant to give citizenship to people and not to deprive anyone. Therefore, the opposition, mostly Congress and the Left parties have no reason to mislead the people in this regard,” Patra said.

Mohanty said the Centre has given relief to scores of people who have been harassed in neighbouring countries in the name of religion. “Therefore, the opposition leaders should thank Modi for bringing the CAA,” Mohanty said.