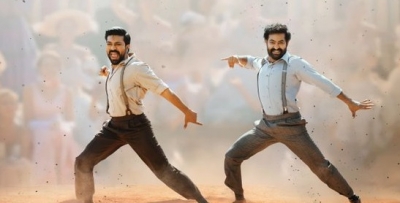 Hyderabad: After receiving international acclaim and bagging a Golden Globe award, RRR team now has its eyes set on the biggest of them all – Oscar.

The Golden Globe award for Best Original Song has heightened the expectations of not just S.S. Rajamouli and his team but the entire Tollywood.

RRR for Oscars has been one of the top trends for the last couple of days and the fans of Junior NTR and Ram Charan are rooting for the epic action drama to bag the Academy awards.

Rajamouli with both the heroes of the movie and other members of the team were present in Dolby Theatre, Hollywood when music director M.M. Keeravani received the Golden Globe award for Naatu Naatu song.

The foot-tapping hit has become the latest national craze and the spotlight is on what made this song so different that it beat the likes of Rihanna and Lady Gaga.

The song has already been shortlisted for the 95th Academy Awards. It will be known on January 24 if the song makes it to the nomination list.

Adding to the excitement of his fans, Ram Charan has said that if RRR goes on to win the Oscar he will dance his heart out with Junior NTR.

The popular actor said in an interview that they would again dance for 17 times if the movie bags the Oscar. He was referring to the number of takes shot during the shoot for the song.

The combination of music director M. M. Keeravani’s melodious music, lyrics of Chandrabose, voice of Rahul Sipligunj and Kaala Bhairava and choreography by Prem Rakshith Agave the song which proved an icing on the cake for the blockbuster.

Prem Rakshith’s team is said to have recorded as many as 80 variations of hook steps. It finalised the best variation which went on to prove a huge hit.

It will be interesting to see if Ram Charan and Junior NTR recreate the magic on stage if the movie bags the biggest award.

The 95th Academy Awards ceremony will be held on March 12.