‘Rangoon’ trailer: Intense love notes from the time of war

ENTERTAINMENT
By Biswajeet On Jan 6, 2017 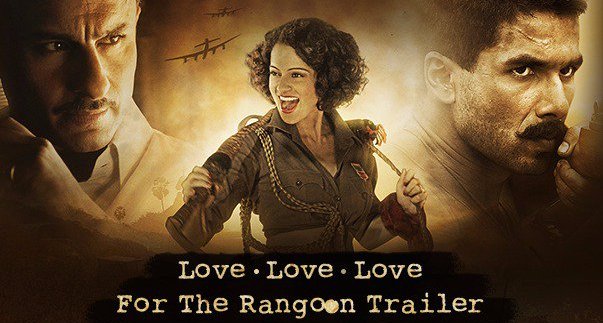 It is intense, dramatic, historic and bold – the trailer of the much-awaited film “Rangoon”, which was released on Friday, opens a story of how love blooms in the time of war, with actors Kangana Ranaut, Saif Ali Khan and Shahid Kapoor highlighting the stormy affair between the characters.

The over three-minute long trailer opens with war planes hovering over a wide landscape and airstrikes. Putting the story in motion, the trailer takes one back to British India, with the freedom movement at an all time high and protests.

Amid all the turbulence for independence, the main spotlight is on a love triangle between an actress, filmmaker and a soldier.

In the Vishal Bhardwaj directorial, Kangana plays the role of a seductress Julia and Saif is the filmmaker in love with her. Shahid is the soldier named Nawab Malik who falls in love with Julia during a train journey.

Along with the stunning visuals and aesthetic locales, one has to mention that dialogues add a zing to the clip. Be it the way Kangana says ‘bloody hell’, or her getting irritated and asking Shahid if he will even follow her to the bathroom.

“Rangoon” is set in the early 1940s, around the time of World War II. It narrates the story of how the relationship between three people – Saif, Kangana and Shahid – changes when she is sent to Burma to motivate the soldiers. She falls in love with Shahid during this journey.

One can also expect intimate scenes. Kangana is seen kissing Shahid, and seems to have gone topless for some scenes.

In terms of looks, Saif is the classy and sophisticated filmmaker, and Shahid sports a rugged look – who gets on board to keep Kangana’s character safe during her trip to Burma.

“Rangoon”, backed by Sajid Nadiadwala and Bhardwaj, is slated to release on February 24, 2017. (IANS)

Yuvraj back in Kohli-led ODI, T20 squads against England