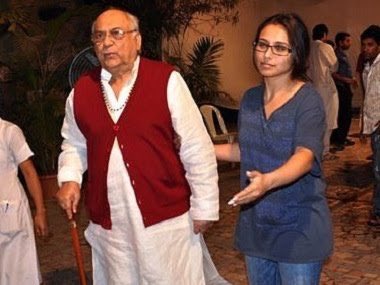 His wife Krishna told IANS over the phone: “He was admitted to the Breach Candy Hospital from October 13 and his treatment was going on. Unfortunately, his body was not responding to the treatment that well this time. Last night, his blood pressure suddenly dropped around 5 a.m.”

In a voice full of emotion, she said: “He is no more, everything is finished.”

Ram, one of the founders of Filmalaya Studios here, had directed films like “Hum Hindustani” and “Leader”.

He had also directed and produced Rani’s debut film “Biyer Phool” in 1996.

“Saddened by the passing of veteran filmmaker Ram Mukherjee. My condolences to his family” tweeted Banerjee.

Actor Prosenjit Chatterjee tweeted: “Really sad to hear Ram Mukherjee passed away. I had an opportunity to work with him in ‘Rakta Nadir Dhara’, ‘Raktalekha’, ‘Biyer Phool’. RIP Ramda.”

Rani, along with husband Aditya Chopra, was present at the last rites at the Pawan Hans Crematorium in Vile Parle West here.

Actors Aamir Khan, Anil Kapoor and Ranveer Singh were among the others who came to pay their last respects.
(IANS)

Half marathon flagged off in Odisha to remember martyrs