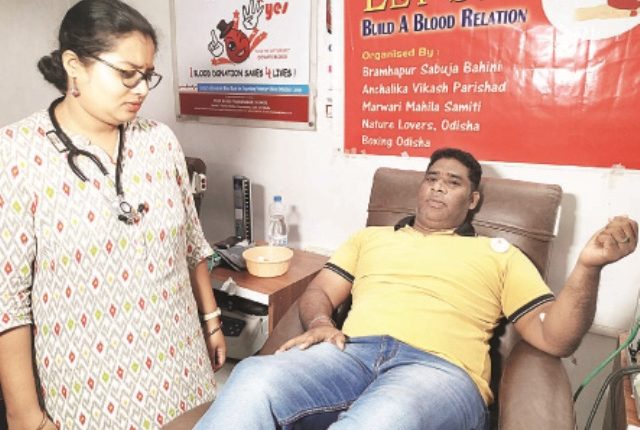 Berhampur: “Every drop of blood is like a breath for someone”. A man with a very rare blood type turned saviour for a woman, who was battling for life following extreme blood loss post delivery at the MKCG Medical College & Hospital here.

The 41-year-old Dilip Kumar Barik, a resident of ST Colony in Rourkela, became the reason of smile to many faces by donating blood.

According to reports, a woman namely Sabita, wife of Narayan Raita of Mendasingi under Patrapur block was admitted to the MKCG Hospital on October 12 for delivery. Next day, she delivered a baby girl following surgery. However, she developed postpartum hemorrhage (heavy bleeding) after cesarean birth of her baby.

Entire family was under stress even after being blessed with a baby girl as the mother was critical at the hospital. After blood-test it came to fore that the patient has a very rare type of blood ‘Bombay phenotype’ commonly known as ‘hh’ blood group.

Her family approached several blood banks to arrange the rare blood type, but could not find anywhere. In search of particular blood group from various blood donor centres, blood bank doctor Rashmita Panigrahi came to know about Dilip, who has group hh blood.

The doctor immediately contacted the person seeking his help to save the patient’s life. On receiving the call from Dr Panigrahi, Dilip reached Berhampur on Saturday and set example for many blood donors by donating his blood to the woman.

Sources said that Dilip, who is working at a private firm in Cuttack, had earlier donated blood four times. With yesterday’s incident, he became the donor for fifth time.

Even as he has been told by the doctors not to donate blood time and again due to rare type of blood. However, he listened to his own call and came forward to help mankind.

Worth mentioning, the Bombay phenotype (hh) is rare blood group. It is deficient in expressing antigen H. The rare Bombay blood group was first discovered in Mumbai (then Bombay) in 1952 by Dr YM Bhende. Globally, the hh blood type has an incidence of one in four million. In India, one person in 7,600 to 10,000 is born with this type.

20 Judo players from Odisha injured in bus accident in Manipur