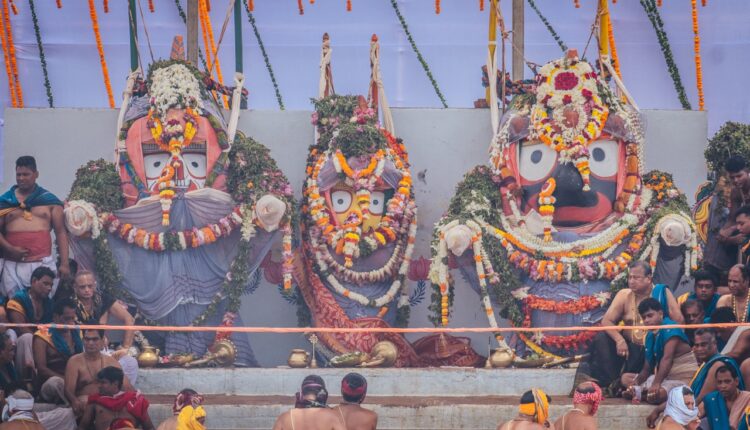 Puri: As the world famous Ratha Jatra of deities of the Shree Jagannatha Temple here is remaining a few days, the Lord Jagannatha, Lord Balabhadra and Devi Subhadra has recovered from the illness. This was informed by the servitors to Puri Gajapati Maharaj Dibyasingh Deb today following the ‘Bije’ ritual on the occasion of ‘Dwadasi tithi’.

During a discussion Maharaj Dibyasingh Deb’s palace at Puri, the servitors told him the ‘Dasamula’ (ten herbs) were provided to the deities on occasion of the ‘Dashami tithi’. The ‘Baidyaraja’ (traditional healer) prepared the ‘Dasamula’ and gave it to the sibling deities, who was in the ‘Anasara’ since the ‘Snana Purnima’.

The servitors also informed Maharaj Dibyasingh Deb that the ‘Chandana Lagi’ ritual of the deities was performed during ‘Ekadasi tithi’ yesterday. The ailing deities have fully recovered, said one of the servitors.

The deities of the Shree Jagannatha Temple, Puri, were in a 14-day ‘Anasara’ when they fell ill after the ‘Devasnana Purnima’ or holy bathing ritual. They were bathed with 108 pitchers of holy water at the Snana Mandap of the temple.

As the deities were in ‘Anasara’, devotees were not allowed to pay obeisance to them during the 14-day period.

The Lord Jagannatha, Lord Balabhadra and Devi Subhadra will give darshan to the devotees on June 29, the day on which the ‘Nabajaubana Darshan’ falls.

The annual Ratha Jatra of the deities at Puri will be held on July 1.