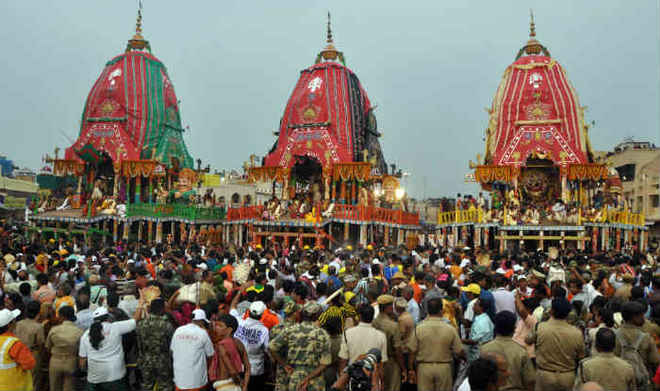 Puri: Amidst mild showers in the morning in pilgrim town Puri, a sea of devotees pulled the chariots of Lord Jagannath and his siblings towards Gundicha temple.

The pilgrims, who had been waiting to have glimpse of lords riding the chariots, flocked to see the deities and to become one with Lord Jagannath during nine-day holy annual Ratha Yatra soon after three giant wooden chariots – Taladhawaja, Darpadalan and Nandighosh – reached the destination point Gundicha temple.

Devotees and pilgrims paid obeisance to Lord Jagannath and his siblings Lord Balabhadra and Devi Subhadra along with Lord Sudarshan, who is placed on the Darpadalana chariot.

As the deities will remain on the chariots for the day, the number of visitors is expected to rise further to Puri. The deities will be taken inside Gundicha temple tomorrow.

The pulling of chariots resumed at around 9.30 am this morning. The chariot of Taladhwaja was pulled first by the devotees towards Gundicha temple followed by his siblings’ chariots.

Sources said that Adapa Bije (lords will be taken in a procession to Gundicha temple) of lords will be conducted tomorrow. The deities will be placed on Janma Bedi (birth place) at the temple.