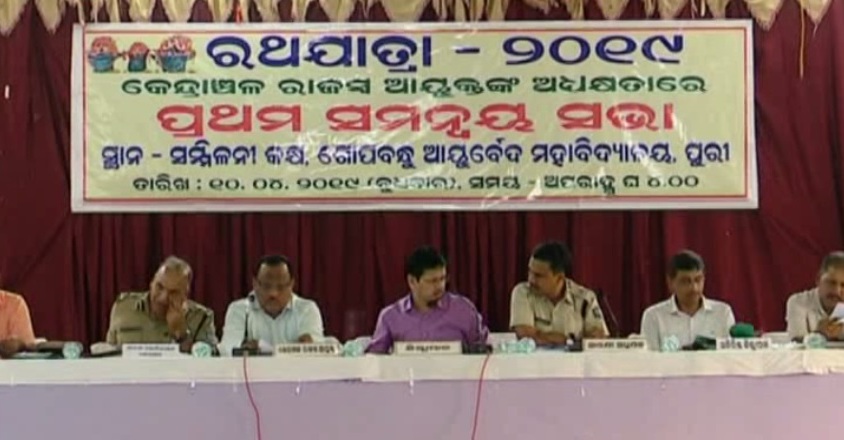 Puri: The first preparatory meeting of the Coordination Committee for Ratha Jatra was held last evening in Gopabandhu Ayurveda Mahavidyalalaya to chalk out action plans for the smooth conduct of the annual car festival, here.

Central division RDC presided over the meeting and instructed officials of health department, public health department and municipality to prepare an action plan for the grand event to be held in July 4 this year. Puri Collector, IGP and temple servitors were also present.

According to reports, Puri Municipality has been directed to remove encroachments on drains along the Grand Road (bada danda). Drainage system will undergo repairing and cleaning prior to Ratha Jatra.

“The meeting also focused on procurement of timber logs, fabrics, ropes for the chariots and their construction, water and electricity supplies, health and sanitation facilities and commutation services, along with parking arrangements,” said RDC Anil Kumar Samal.

He further stated that line officers and sevayats have been asked to conduct their duties in a time-bound manner.

“CDMO has provided a detailed plan on providing 21 additional health camps with doctors and ambulance services. DHS hospitals will be upgraded, along with ICUs with anti-heatwave chambers,” informed Puri collector.

He went on to say that Barricading will be done from Singhdawara and CESU has been asked to install special lighting arrangements.

Labelling Ratha Jatra as the biggest challenge for Odisha Police, IGP Soumendra Priyadarshi said, “Security platoon starting from Rapid Action Force to Special Tactical Unit will be deployed. Arrangements for traffic control, security inside and outside the temple premises, crowd control, coastline safety will be undertaken, like every year.