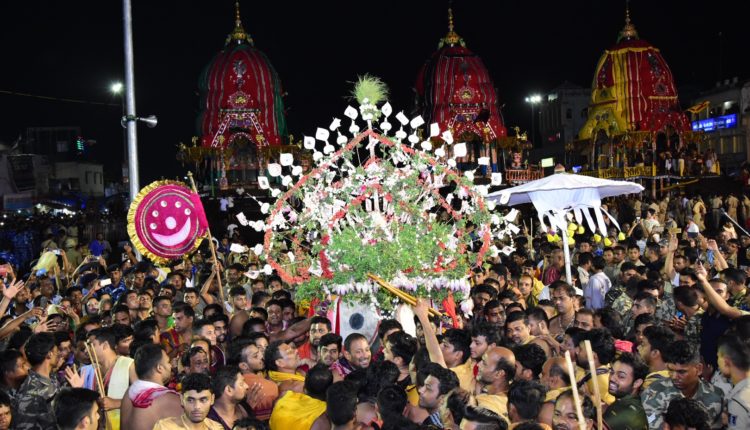 Puri: After the three chariots of the Holy Trinity reached Gundicha temple with a sea of devotees pulling the carts yesterday, the Lord of the Universe and his diving siblings were escorted to Adapa Mandapa inside the temple today.

The deities-Lord Jagannath, Lord Balabhadra, Devi Subhadra and Lord Sudarshan-were escorted to the Adapa Mandap after Goti Pahandi rituals conducted by Daita servitors, which commenced at 6.30 pm. The rituals were conducted outside the Gundicha temple amidst chants of ‘Jai Jagannath’ and ‘Haribol’.

Puri Ratha Jatra to be held like last year amid COVID…

Yesterday, scores of devotees from around the globe thronged the pilgrim town to see a glimpse of the Trinity and pull the Holy chariots. The pulling of chariots that began at 2.15 pm, much ahead of scheduled time, concluded in the evening. Later, the chariots were positioned in front of the Gundicha temple.

This BP drug may increase risk of bowel condition