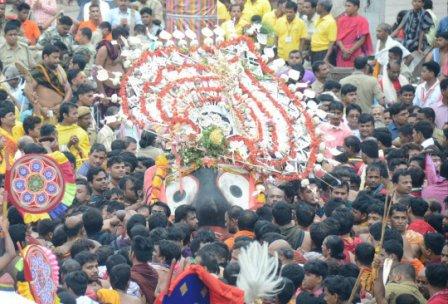 Puri: Undeterred by the heavy downpour, a sea of humanity today thronged the pilgrim town Puri to partake in chariot pulling festival of Lord Jagannath, Balabhadra and goddess Subhadra on Grand Road with joy and devotion.

Entire Grand Road and limitless skies reverberated with the chanting of ‘Jai Jagannath’ and ‘Hari Bol’ by the devotees and pilgrims who witnessed the much-awaited annual Ratha Jatra.

Pilgrims, who were capturing the entire view on their lenses, also rushed to the site where the chariots were parked and touched the holy rope out of devotion towards the sibling deities.

The chariots were ready for moving towards their destination – Gundicha Temple – after the deities occupied their seats on their respective chariots post Pahandi (procession) and other rituals conducted by the servitors and priests.

The deities were taken out of temple and brought in Pahandi, which began at around 10.30 am, to their chariots parked in front of Simha Dwar on Grand Road.

The deities along with Lord Sudarshan were taken out in Dhadi Pahandi (line procession) amidst sounds of ghanta (cymbals), kahali (type of shehnai), mahuri, mardal (similar to pakhawaj) and bells through Baisi Pahacha (22 steps of the shrine) en route to the chariots.

Govardhan Peeth Shankaracharya Nischalananda Saraswati along with his disciples had darshan after the deities were placed on their respective chariots. Gajapati Maharaja Dibyasingh Deb conducted holy ritual of Chhera Pahanra (customary sweeping of chariot floor with golden broom) on three chariots – Taladhwaj, Nandighosh and Darpadalan – at around 3.15 pm and offered prayer to Lords for smooth conduct of the festival.

Elaborate security arrangements were put in place for smooth conduct of the festival. Several voluntary organizations also extended their service for the religious festival.

The nine-day festival will end with Bahuda Yatra (return journey) of deities to Jagannath temple.

Odisha’s Srimandir to reopen next month