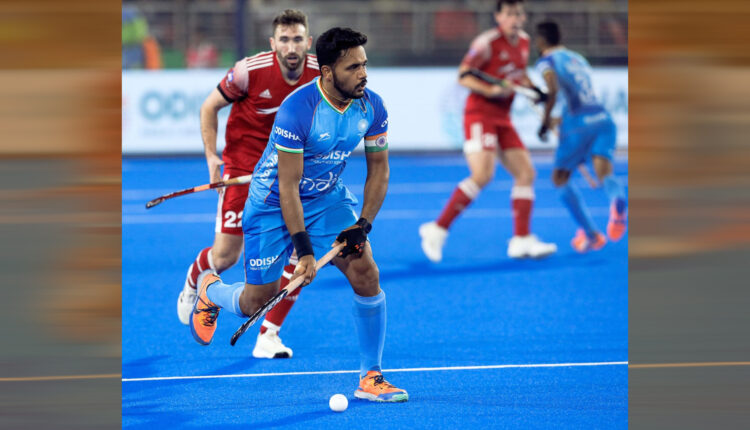 Rourkela: It was the third consecutive day of FIH Odisha Hockey Men’s World Cup 2023 action in the Birsa Munda Hockey Stadium as teams in Pool D began the second round of matches.

Spain faced off against Wales in game one, with both teams looking for their first goals and first points of the tournament. Spain are the higher-ranked side and proved it as they made the big moments count, scoring twice in the first half and thrice in the second half to take all three points. Marc Reyne and Marc Miralles were on the scoresheet twice for the Red Sticks, with captain Alvaro Iglesias adding a fifth. Wales, playing in just their second-ever men’s World Cup game, scored their first-ever goal through James Carson, to take some positives from the loss.

England and India have a recent history of playing tough matches with very little to separate the two teams and that proved to be the case once again as the battle between the two top-ranked teams of Pool D ended in a 0-0 draw. Both sides had chances aplenty to score but good defending and lack of composure from attackers in crucial moments kept the score tied and earned the teams a point each. 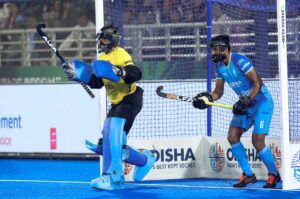 Wales and Spain started off as a fairly even encounter with both teams trading possession and territory in the first quarter and creating scoring opportunities without managing to convert them. Spain gained control of the game in the second quarter and scored twice. Marc Reyne was the first to get on the board before a beautiful team move was finished off by captain Alvaro Iglesias.

Wales kept their intent positive in the second half and continued their search for a first goal in the FIH Men’s World Cups, but Spain used the spaces left behind the Welsh defence to add two more goals. Marc Miralles scored the first penalty corner goal for Spain in this World Cup with a thundering low drag flick, before Marc Reyne scored his second goal of the game, to seal his team’s victory. Wales would go on to score their first ever World Cup goal through James Carson in the 53rd minute, but Spain would restore their 4-goal lead 4 minutes later, as Marc Miralles was afforded a lot of space and time on the right side of the Welsh circle, and picked his spot perfectly as Spain earned their first three points in the World Cup.

Marc Miralles was awarded the player of the match and said: “Happy with the 3 points today after the loss in the first game. We wanted today’s game to be perfect and we got close to it. Looking forward to the game against England next.”

England vs India was expected to be a battle for top spot in the Pool D and the first half of the game proved the expectations were accurate as an edgy half of hockey unfolded in the Birsa Munda Hockey Stadium in Rourkela in front of a packed crowd, with neither team giving an edge, and neither gaining one. Despite a plethora of penalty corners and opportunities for both teams, there was no finishing touch to be found as teams went into the break at level footing.

The second half saw India dominate possession and territory with midfielder Hardik Singh being the standout player, but once again there were no finishing touches to be found in the circle. Mandeep Singh did get the ball in the back of the goal towards the end of the 3rd quarter but the whistle had already been blown for a foul before the goal.

Phil Roper was on the end of a great long pass, which just left him with the keeper to beat, but his attempt to lift the ball over Sreejesh went just wide and India breathed a sigh of relief. The final scoreline remained 0-0, but a major concern for India will be the health of standout player Hardik Singh who appeared to pull up with a groin injury towards the end of the game.

English keeper Oliver Payne was awarded player of the match and said: “We had a good game overall but are a little disappointed not to have capitalised on the scoring opportunities we had today. It was a game we could’ve won, but it’s a hard-earned point and we will take it.”