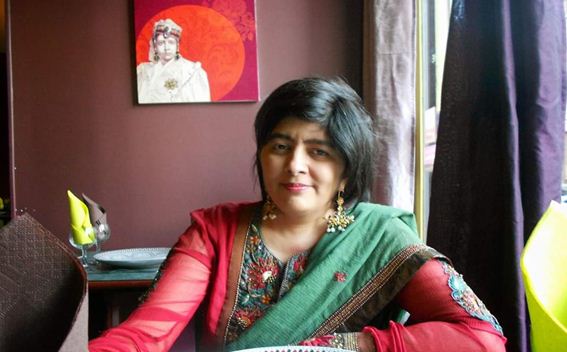 To be in the company of Monali Hota (1970-2020), was to be in the presence of the divine. Monali had a beaming smile, generous words and genuine concern for everyone. Even when battling an aggressive illness, she delighted in hosting and feeding friends and family, and put the happiness of others before her own. The magical way she described ordinary things, the pleasure she took in simple joys, and her fierce determination have been especially inspiring to her proud mother, Rama Rani Hota, sisters, Rupali and Pinky, brother-in-law Vinayak and niece, Akila.

Monali grew up in Odisha, spending cherished moments with her maternal grandparents, Late Sri Shyam Sunder Misra, prominent social worker and social reformer and Late Srimati Kadambini Misra. These experiences laid the foundation for her strong affinity for simple living and high thinking, and desire to contribute to society. Her passion for education was apparent early as she distinguished herself academically and guided young children through their studies.

Monali left Odisha to pursue a Bachelor’s Degree in Mathematical Statistics at the prestigious Lady Shri Ram College in New Delhi. It was at this time that she began expressing interest in advertising and marketing. After pursuing her MBA at Xavier’s Institute of Management in Bhubaneswar, she began her career by working at Hindustan Thompson Associates (Now J Walter Thompson), a leading advertising agency. She then moved to Dabur India Limited where she became an award-winning employee, rose to a high-ranking management position and travelled the world.

Monali has never been one to rest on her laurels. Months before she was to be promoted to the position of vice president, she decided to leave corporate life to pursue her doctoral studies at the University of Western Sydney, Australia. Her research focused on children as consumers at a time when the topic had received scarce attention. She worked tirelessly on her thesis, and secured a prestigious position at IESEGSchool of Management at the Catholic University of Lille as assistant professor marketing in 2006, even before her thesis had been formally completed and filed.

Monali harboured many hopes and dreams for her new life in France. But soon after, she had to deal with a great tragedy as she began battling a rare and extremely aggressive form of Multiple Sclerosis diagnosed in 2009. With the support of IESEG, she continued to work through enormous pain and disability. She taught masters and doctoral level courses, collaborated with colleagues on publications and presented her work at international conferences, all the while advising students who hailed her support for their work. She became Associate Professor in September 2019, a tremendous accomplishment that attested to her dedication and hard work. Through these years, her friends and colleagues in France marvelled at her positivity and stellar work ethic.

In January, 2020 she entered the most acute six months of her suffering. After her mother went to visit her in the hospital after the long shutdown of four months in France, she found that Monali had saved a rose to give her for Mother’s Day. That gesture contains the very essence of Monali and her immense love, concern and compassion for everyone around her. Her absence will be felt forever by her mother and sister, aunts and uncles, cousins, and friends in India and France. Because of her loving nature and popularity, 30 people attended her cremation, which was held in France and 300 people attended the virtual memorial service organized by her friends and colleagues in IESEG, the institute she loved most. Her niece, Akila, will continue her legacy of hard work, determination and perseverance. As one of her closest friends in France, Veronique, said at her memorial: “whenever we will see a rose, we will think of Monali” – our precious flower who tried to bloom and survive in a difficult world with grace and dignity.