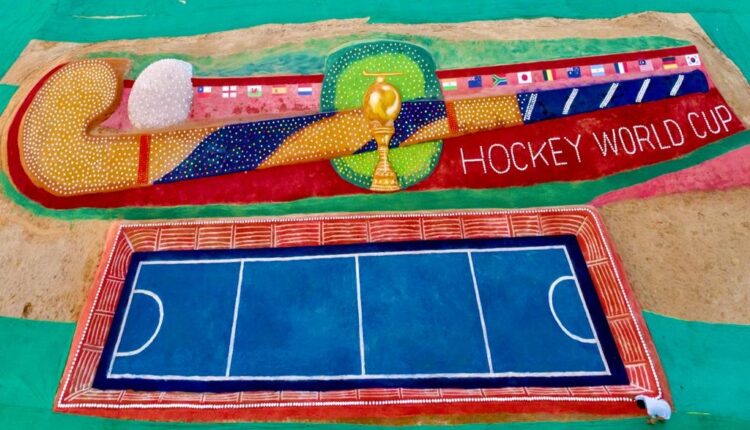 Bhubaneswar: When one arrives at the Biju Patnaik Airport here, they are sure to be welcomed by beautiful sand art that depicts the mythologically-significant monuments of the erstwhile state. This time, not only will the visitors traveling for the most-awaited FIH Odisha Hockey Men’s World Cup 2023 Bhubaneswar-Rourkela be treated to sand sculpture at the airport, but one can also witness the world’s largest hockey sculpture erected on the banks of the Mahanadi river at Cuttack, where the ‘celebration’ event is scheduled for on 11 January to mark the opening of the mega hockey event starting 13th January.

Having taken two days to complete this incredible art installation, Sudarshan Pattnaik has once again showcased the passion Odisha has for the national sport. He said, “There is a festive atmosphere in every village you travel to in Odisha because of the World Cup. It is a very special event for the people of Odisha and there are celebrations everywhere. To welcome everyone to this beautiful state, we wanted to create something unique this time, that’s why we thought of using hockey balls and create this installation.”

It took Sudarshan and his team of 15 students two full days to complete the installation and it will be up for display all of 11th January when thousands will throng the Barabati Stadium to catch a glimpse of Bollywood stars who will perform during the opening ceremony. “During the previous World Cup, we had installed sand art at the Kalinga Hockey Stadium and the art work depicted the major monuments of Odisha like Konark. This time we have used the installation to welcome all the 16 participating teams to Odisha and we have created 16 national flags in the installation,” added an elated Pattnaik about this unique creation.

The sand artist has also been awarded Padma Shri in 2014, for his participation in a globally renowned sand art competition. Till now, Sudarshan Pattnaik has participated in more than 60 international sand art championships as well as festivals. He has not only represented India in such competitions but also won several prizes for the country. It is worth noting that the artist uses his creative expression to spread a social message every time. He also holds the Guinness Record (2017) for building the tallest sand castle at 48 feet.