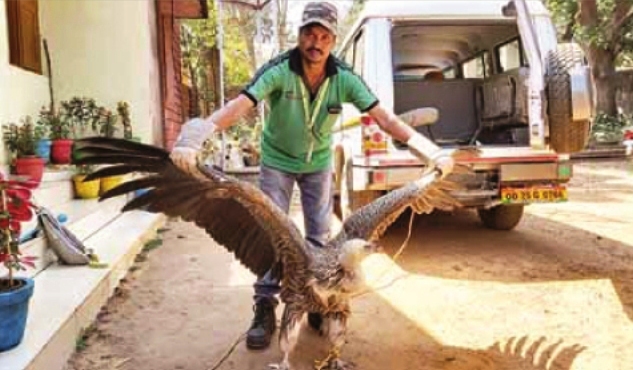 Bhubaneswar: An endangered vulture species, which was rescued in Nayagarh district, has been brought to Nandankanan Zoological Park (NZP), on outskirts of Bhubaneswar.

The rare bird of prey popularly known as ‘Himalayan vulture’ or ‘Himalayan griffon vulture’ is aged around 4 years old. However, the gender of the vulture is yet to be identified.

Currently, the ailing bird has been now kept in quarantine for treatment. With arrival of the vulture, the number of endangered vulture species has increased to 3 at the zoo.

Worth mentioning, the Himalayan griffon vulture is an Old World vulture in the family Accipitridae. The particular species is found along the Himalayas and the adjoining Tibetan Plateau.

However, it is suspected to have flown to Odisha after losing its direction due to dense fog.

The locals had found the injured vulture near a poultry farm at Gunduria village under Ranapur block on February 21. They informed the forest department for rescue of the bird. As the bird was suffering from illness, the forest department had made arrangements for its treatment at Ranapur. Later, the vulture was shifted to the College of Veterinary Science and Animal Husbandry under Odisha University of Agriculture and Technology (OUAT), Bhubaneswar, on Feb 24 for better treatment.

By the order of Principal Chief Conservator of Forests (PCCF) Odisha, the bird was brought to Nandankanan zoo on Wednesday night.