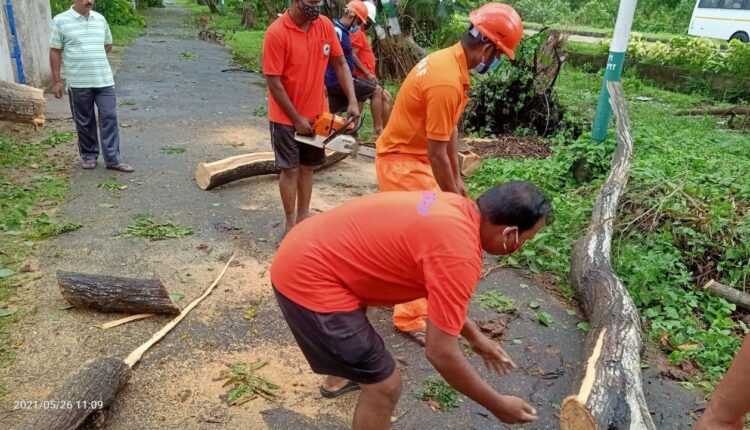 Bhubaneswar: Soon after the process of landfall of very severe cyclonic storm Yaas completed today, the restoration activities began in the areas affected by the storm in Odisha, informed Special Relief Commissioner.

“The landfall process has completed. The very severe cyclonic storm Yaas crossed the north Odisha coast about 20 km south of Balasore between 10.30 AM and 11.30 AM. The restoration of power supply and other activities have begun on a war-footing manner in the cyclone-hit districts,” said SRC Pradeep Kumar Jena.

Speaking about damage caused by the cyclone in Odisha, he said that no extensive damage has been reported in Jagatsinghpur, Jajpur and Kendrapara districts. The roads in these districts will be cleared by today evening.

The cyclone did not cause much damage in Balasore district, where the storm hit. However, a number of trees has been uprooted in Nilagiri area. The NDRF, ODRAF and Fire Services teams have been deployed for restoration work in Bhadrak district. The work to remove debris from roads and uprooted trees will be cut down after the wind speed decreases in the district.

He said that two persons have died in the cyclone, one from Balasore district and another in Keonjhar district.

“A young man was in a cyclone shelter in Balasore district was killed when a tree fell on him on his way to home. Another person in Keonjhar district died in a similar manner, according to media reports. The collectors of these two districts have been asked to investigate into the matter and submit detailed reports on casualties,” Jena told media.

The SRC said that seawater has entered into many villages in Bahanaga, Remuna in Balasore district and Dhamra in Bhadrak district due to high tide caused by the cyclonic storm.

However, the healthcare services are running smoothly at all COVID hospitals in cyclone-hit districts with zero casualties, he further said.

One more Journalist in Odisha succumbs to Covid-19