RESURRECTING THE SARDAR PATEL LEGACY : Will he have approved? 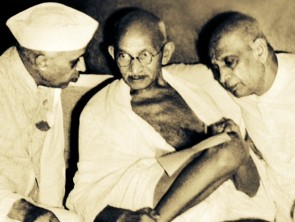 The manner in which the 139th birthday of Sardar Vallabhbhai Jhaverbhai Patel (Oct 31, 1875 – Dec 15, 1950) is being celebrated contains within it both a tinge of irony and a reflection of the self-confidence of the Modi-led BJP that it can resurrect a long forgotten Congress leader and thereby tacitly claim ownership of the ‘Iron Man’ of the freedom struggle.

The unstated comparison of Patel with Modi and their common Gujarat roots add to the symbolism of Oct 31 this year, which has now been declared ‘Rashtriya Ekta Divas’ (National Unity day).

Oct 31 saw a paradox of sorts with President Pranab Mukherjee attending a Congress party led event at Shakti Sthal in memory of former prime minister Indira Gandhi – an event which the current prime minister will not attend – and then later the president will join the Sardar Patel related events, including a run for national unity.

It is instructive to recall that Oct 31 and the birth anniversary of Sardar Patel have always remained a very low-key affair outside of Gujarat. Most Indians are aware of Oct 2 (Gandhi Jayanti) and Nov 14 (Nehru’s birthday observed as Children’s Day) and in recent decades, Congress led governments have celebrated the birthdays of Indira Gandhi (Nov 19) and Rajiv Gandhi (Aug 20) with gusto and high visibility.

Venerating some leaders and progressively marginalizing their peers or competitors is par for the course in Indian politics and a thumb-rule is that the Nehru-Gandhi family has managed this process with considerable success. For younger generations born after 1980, the Gandhi-Nehru-Gandhi telescoping has become subliminal and the fidelity to facts is of little consequence. Thus Mohandas Gandhi – the father of the nation and revered as the ‘mahatma’ – is perceived to be part of the lineage that extended to Indira Gandhi and her son Rajiv Gandhi. Progressively the ‘family’ acquired a primacy in Indian politics and within the Congress party that is now being challenged.

Congress prime ministers who came from outside of the ‘family’ – Lal Bahadur Shastri and later P.V. Narasimha Rao – were never given their due and the shabby treatment meted to them after their demise is part of the less savoury history of the Congress party. Resurrection is the exception and ironically, Sardar Patel confidante of Mahatma Gandhi and a stalwart of the Congress Party, is being given the recognition that was denied to him 64 years after his demise in December 1950.

Sardar Patel who was just six years younger than M.K. Gandhi (born 1869) and a good 14 years older than Nehru (born 1889) had an extraordinary career. Born in rural Gujarat, he was self-made in the true sense of the term and bore every personal challenge with remarkable determination to prevail and in stoic manner – characteristics that are associated with him.

Sacrificing his personal benefit or interest for a larger collective good, whenever such choices presented themselves – Sardar Patel enabled his elder brother in 1907 to avail of an educational option in Britain that was meant for him (Vallabh) and denied himself of that coveted opportunity. Yet his determination saw him prevail – and as a late matriculate who managed to reach that perch only at age 22, Patel went to Britain in 1911 at age 36 to train as a barrister and managed to obtain the first rank in a record period of 30 months.

Vallabh Patel met Mohandas Gandhi in late 1917 ands soon became part of the Gandhi led anti-British protest movement. Elected president of the Gujarat Congress Sabha, he remained loyal to Gandhi and reminisced that the Champaran peasants movement was the turning point in his life. The early organizational success of the Gandhi movement was made possible by the stoic but methodical Patel and in later years Gandhi referred to Patel as his younger brother, while Jawaharlal (Nehru) the fond son.

Often associated with the Hindu right-wing faction in the Congress Party – Patel was a leader of strong conviction and dissented where warranted but in the end – extended valuable support to both Gandhi and Nehru in the interest of realizing a free and independent India wedded to the democratic principle and constitutional rectitude.

Architect of the integration of almost 560 princely states into independent India – a task whose complexity is of unimaginable magnitude – Patel combined realpolitik with sturdy principle. This was evident in his handling of the Hyderabad police action and the October 1947 decision to send the Indian military to defend Srinagar. Perhaps one of the less known but sterling contributions made by Patel in realizing the vision of a free and equitable India was in choosing Bhimrao Ambedkar as the chairman of the Drafting Committee of the Constitution. This vignette has been captured in a poignant manner by Shyam Benegal in his television series ‘Samvidhan’.

As independent India’s first home minsiter and deputy prime minister – Patel managed the post-partition refugee influx in affirm and empathetic manner. He also laid the foundation for the Indian civil service (the steel-frame, alas now rusting) and the police service. His appreciation of India’s security challenges apropos Pakistan and China are part of the official record, as also his advice to Nehru not to take the Kashmir issue to the UN.

Poor health led to his demise in December 1950 – a little less than a year after India became a republic. Often perceived to be the alternative to Nehru, his loyalty to the cause of India remained paramount. Soon after Mahatma Gandhi’s assassination in January 1948 – there was considerable speculation about the rivalry between Nehru and Patel. In the correspondence the two exchanged, Sardar Patel reassured his younger colleague: “We have both been lifelong comrades in a common cause. The paramount interests of our country and our mutual love and regard, transcending such differences of outlook and temperament as existed, have held us together.” He added that Bapu’s assassination that left the nation orphaned had only awakened “a fresh realisation of how much we have achieved together and the need for further joint efforts in our grief-stricken country’s interests.”

While the resurrection of Sardar Patel is no doubt commendable and a certain degree of political jostling is inevitable, it would be misleading to reduce the legacy of the Sardar to an insular right-wing Hindu template. He internalized and mediated the Gandhian ethos and the inclusive Nehruvian aspiration through the lattice of political pragmatism and feasibility. Neither he nor Nehru were infallible and the current recall has to retain a degree of constructive malleability.

However, the Sardar may not have quite approved of the state exchequer spending almost Rs.3,000 crores to erect the tallest statue in India in his memory. While he had his share of warts and personal foibles, personal vanity is not a trait associated with the Sardar.
__________________________

*C. Uday Bhaskar is distinguished fellow, Society for Policy Studies. The views expressed are personal. He can be contacted at [email protected] – IANS