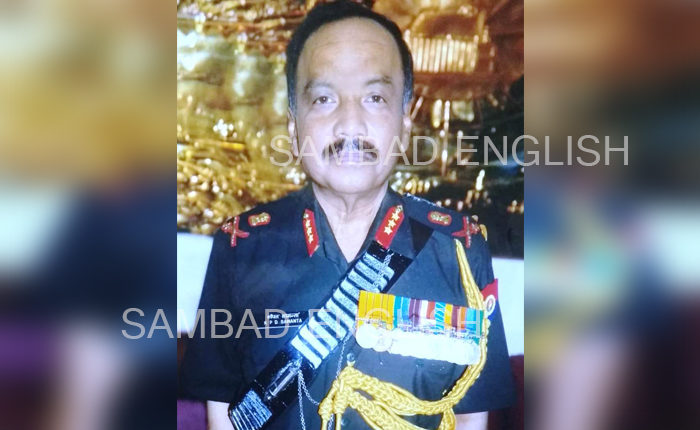 Bhubaneswar: Eminent defence expert Lt Gen (Retired) KP Dhalasamanta from Odisha passed away today at a private hospital in New Delhi. He was 71.

Dhalasamanta was battling with cancer and under treatment at a hospital since last one month. He breathed his last around 7.30 am. He is survived by his wife Sumananjali Devi and son Pranab Dhalasamanta, who is Deputy Executive Editor with The Economic Times.

Dhalasamanta, the retired Director General of the Rashtriya Rifles, India’s premier counter insurgency force deployed in Kashmir, was commissioned at the young age of 19 to the Regiment of Artillery. He had fought in the 1971 war on the Eastern front and was awarded the Poorvi Star.

He was among the veterans invited regularly to Bangladesh as a mark of honour for their valiant efforts in the liberation of Bangladesh.

Lt General had also participated in Operation Blue Star, the larger fight against terrorism in Punjab. He had commanded an artillery regiment in the world’s highest battlefield – the Siachen Glacier. During the 1999 Kargil war, Gen Dhalasamanta was instrumental in helping deploy the 155 mm Bofors guns in difficult conditions.

He had earned a considerable reputation in roles involving aid to civil authority. As Sub Area Commander of Bihar, Jharkhand and Odisha, he contributed immensely in providing aid during various disasters and formulating policies on disaster management besides managing military assets in the three states. He spearheaded the military response to the Bihar floods of 2002 and the Rajdhani train accident at Gaya.

As the DG of Rashtriya Rifles during the period from 2007 to 2010, he was instrumental in leading, managing and modernizing the then 92000-strong counter-insurgency force. During his tenure, there were no cases of human rights violation involving Rashtriya Rifles (RR) reported. The competence and moral ascendancy of RR had helped establish relative peace in Jammu and Kashmir enabling smooth conduct of elections in 2008.

On retirement, he was made Member of the then newly created Armed Forces Tribunal in Kolkata before settling down in Bhubaneswar since 2014 onwards.

Besides, Gen Dhalasamanta was a specialist in Group Behavioral Science and a trained Interviewing officer. He had headed the Services Selection Centre at Bhopal, which chose officers into the Army and Navy. He had interviewed more than 5000 officer candidates in this role. Also, he was associated with the Defence Institute of Psychological Research (DIPR) on related issues besides being in the expert panel with the UPSC.

Born to former district judge Raghunath Dhalasamanta and mother Swarnamayee Devi, Gen Dhalasamanta was also a poet. He had written several Odia poems and was involved in Odia theatre.

On August 27, 2017, his mother had passed away at a private hospital in Puri. She had dedicated her entire life to service of Lord Jagannath after her husband’s death. She was the “chaamara sevika” of Lord Jagannath in Srimandir, Puri.

#Odisha mourns the loss of one of its most illustrious sons, Lt Gen (retd) KP Dhal Samanta. He was a veteran of 1971 War, Op Blue Star, Siachen & Kargil War. A proud alumnus of Sainik School, BBSR retired as DG of Rashtriya Rifles India’s main counter insurgency force in J&K.

Lockdown: Teenager tries to wheel friend into flat inside suitcase