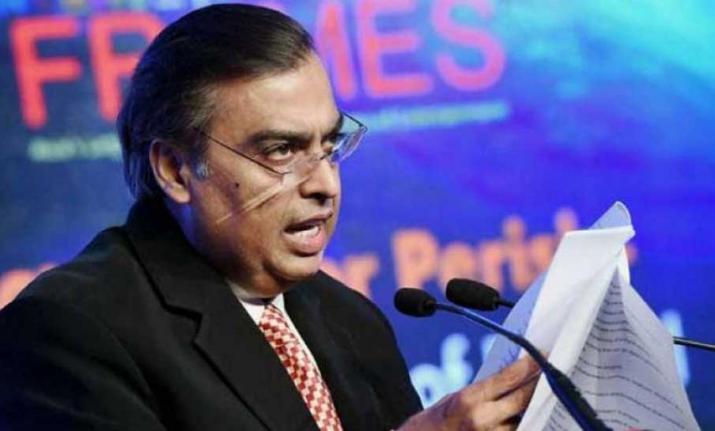 Mumbai: Riding high on Jio tide, Reliance Industries (RIL) Chairman and Managing Director Mukesh D. Ambani on Thursday said the company has doubled its subscriber base to 215 million in 22 months and is all set to launch much talked-about fibre-to-the-home broadband services JioGigaFiber soon.

Addressing the shareholders at the 41st Annual General Meeting of RIL, Ambani said: “As India starts on its high growth journey to double the size of its economy by 2025, I assure you that the size of Reliance will more than double in the same period.”

Reliance Jio to give 100 GB per month free internet for 90 days; Here’s how

Describing this as the company’s “golden decade”, he also said that it’s consumer businesses is poised to contribute equally to overall earnings as the energy and petrochemical businesses.
The company currently has more than 25 million JioPhone users.

Starting this Independence Day, August 15 people can start registering for JioGigaFiber through both MyJio and Jio.com.

“Your company has already invested over Rs 250,000 crore for creating state-of-the-art digital infrastructure to provide mobile and broadband connectivity across the country, with the largest fiber footprint,” Ambani said.

“For merchants and small businesses, fixed-line broadband means… When you combine fixed-line connectivity with the agility and customer obsession of a small owner-driven business, you empower them to compete on level terms with larger businesses.

“For large enterprises, fixed-line broadband will mean… Having the ability to compete in the global marketplace, using digital tools and techniques that are powering the Fourth Industrial Revolution,” he added.

The company also said it would launch JioPhone2 on August 15, which will be available along with the existing JioPhone. It will have added features like WhatsApp, YouTube and Facebook. It would have a horizontal screen.

“Today we are introducing another attractive offer to feature phone users. It is the JioPhone “Monsoon Hungama” offer. Starting July 21… they can exchange their existing feature phone for a brand new JioPhone for just Rs 501! We have thus reduced the effective entry cost of the JioPhone from Rs 1,500 to as low as Rs 501. Starting August 15, our JioPhone2 will be available at an introductory price of only Rs 2,999.”

“With the added functionalities and strong retail presence across India, the goal that I have now set for our Jio team is to enable 100 million users on this JioPhone platform in the shortest possible time and create another world record,” he added.

He said the new platform will be created through integration of its offline retail arm and online technology platform. “As Reliance transitions to become a technology platform company, we see our biggest growth opportunity in creating a hybrid, online-to-offline new commerce platform.”

“We shall create this by integrating and synergising the power of Reliance Retail’s physical marketplace with the fabulous strengths of Jio’s digital infrastructure and services.”

According to Ambani, the platform will bring together the 35 crore customer base of Reliance Retail stores, 21.5 crore Jio connectivity users and a targeted 5 crore Jio “GIGA-HOMES”; and the “3 crore small merchants and shop-keepers all over India who provide the last-mile physical market connectivity”.

“Hence, we will integrate the physical and digital marketplaces in a uniquely collaborative Bharat-India Jodo enterprise,” Ambani said.

On the experiential side of the new platform, Ambani said: “Our new commerce platform will redefine retail in India by enabling all customers — rich or poor, whether at home or on mobile — to transition from simple shopping to personalised immersive shopping experience.”

“This will be made possible by augmented reality, holographic technology and VR (virtual reality) devices.”

He said the company’s digital connectivity platform has served as the foundation, on which it is building its new commerce platform, media and entertainment platform, education platform, healthcare and agriculture platform.

Further, noting that RIL has successfully commissioned both the world’s largest paraxylene and off-gas cracker facilities at its refinery in Jamnagar in Gujarat, Ambani said the company is looking at delivering natural gas from its KG Basin offshore project by 2020.

He said the company’s hydrocarbon business has further scaled up its capacities during the period in consideration “to become more profitable, integrated and predictable in its earnings profile”.

“We are now nearing the end of our largest-ever investment at Jamnagar and have successfully commissioned and stabilised the world’s largest paraxylene complex.

“Reliance is the second largest paraxylene (PX) producer in the world and Jamnagar has the distinction of being the largest manufacturing facility of PX in the world with 4.2 million tonne (MT) capacity,” he said.

“We also commissioned the largest off-gas cracker complex in the world. Using our refinery off-gasses as feedstock, this cracker is the most cost competitive ethylene cracker, globally.”

During 2017-18, RIL’s refining and petrochemical businesses posted record levels of profitability on the back of expanded capacities, high operating rates, improved cost competitiveness and better margins, the company reported in June.

Its refining and marketing segment posted a 3.2 per cent increase in operating profit which climbed to its highest ever level of Rs 25,869 crore (around $4 billion).

On the exploration business, the Chairman drew attention to RIL’s joint investment plan with British energy major BP to monetise over three trillion cubic feet of gas from new fields in the Krishna Godavari (KG) basin D6 block on the eastern offshore.

“We will deploy many advanced technologies to start gas production in 2020 and reaching full production of 30-35 million standard cubic meters per day (MSCMD) by 2022,” he said.

“Our gas marketing JV (joint venture) with BP is looking for opportunities to source and distribute gas to Indian consumers including in cities,” he added.

“We have started the second phase of CBM development to more than double the current production,” he said.

The company is proposing a cross-border merger of Reliance Holdings USA (RHUSA) with RIL to integrate the US gas resources with the Indian market, he added.