Rituals of Lord Lingaraj halted ahead of Mahashivratri in Bhubaneswar 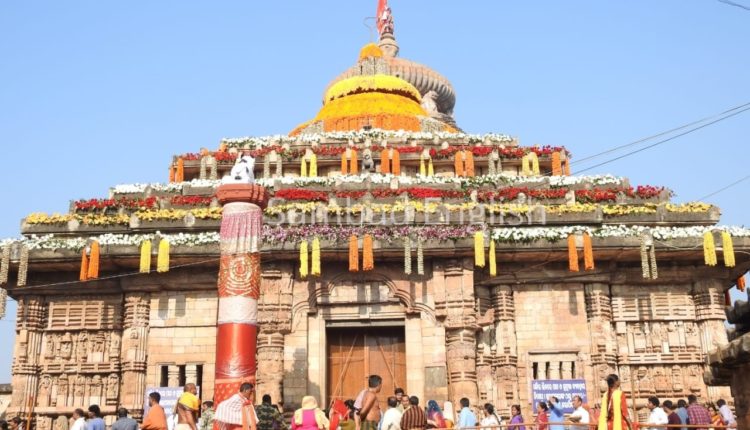 Bhubaneswar: The daily rituals of Lord Lingaraj were halted ahead of Mahashivratri mounting pressure on the Lingaraj Temple Administration to discuss with the servitors on their long-standing demands.

The Brahman Nijog (priest community) of the Lingaraj Temple announced non-cooperation with the temple administration over land allotment and discontinuation of age-old traditions of Lord Lingaraj by suspending all rituals including Rosha Homa today.

The daily rituals of Lord Lingaraj were stopped after Mangal Arati and Abakash in the morning.

According to reports, the Brahman Nijog has been demanding the Endowment Commissioner to re-allot the lands to servitors that are now in the Government record. The priest community also raised demand to resume the traditions, which are not being followed in last six years.

“The lands allotted to servitors earlier for their service to Lord Lingaraj have been occupied by the Government for which the servitors are living in a miserable condition. On the other hand, the Orissa High Court had ordered the Endowment Commissioner to uphold all traditions of Lord Lingaraj. However, the temple administration is yet to implement it over last two years,” said Brahman Nijog Secretary Biranchi Pati.

After Jagar festival, many traditions like Handi Bhanga and Sital Sasthi are observed at the Lingaraj Temple every year. But, the Commissioner of Endowments is neglecting in conduct of those traditions at the centuries old temple. The temple administration has been breaching the traditions in past six years, he added.

In view of possible disruption in rituals of Lord Lingaraj on Mahashivratri scheduled tomorrow, Khordha Collector Sanat kumar Mohanty, who is also the president of Lord Lingaraj Temple Trust Board, convened a meeting with the representatives of agitating servitors’ body for discussion and assured to resolve the issues.

At the meeting attended by the Commissioner of Endowments, the temple administration agreed to meet the servitors’ demand to continue the observance of  Handi Bhanga tradition of Lord Lingaraj.

“The servitors promised for their cooperation in smooth conduct of rituals on Mahashivratri. There will be no disruption in conducting the Jagar Jatra, which will be observed in a low key manner. Only the members of servitors families will be allowed to light diyas (lamps) on premises of the temple on Mahashivratri. The devotees can offer diyas outside the temple in the evening with strict adherence to COVID norms. The devotees can obeisance to the Lord at the temple. They will be permitted to sit on the temple complex for lighting diyas. However, sitting permission will be given for a limited number of devotees. The rest can sit outside the temple in the evening by following COVID guidelines,” the temple trust board chief said.

Speaking on years long suspension of Handi Bhanga tradition of Lord Lingaraj, he said, “We discussed with the servitors over the dispute. We will try to resolve it as per the court order.”