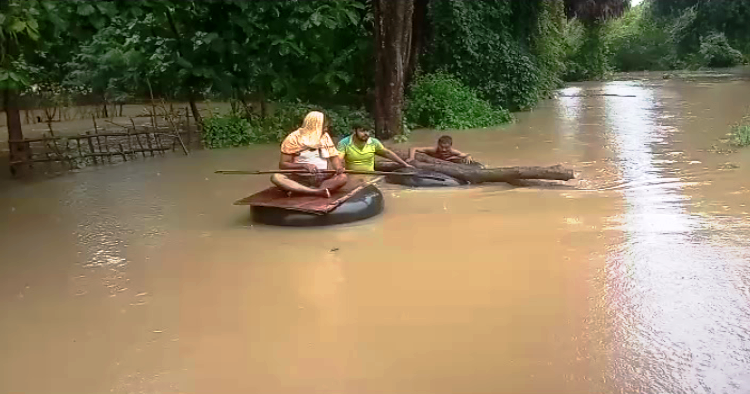 Bhubaneswar: Incessant rain for the last couple of days under the impact of a low pressure over Bay of Bengal has triggered flood-like situation in many parts of Odisha with swelling up of many rivers.

In Balasore district, the water level of Jalaka river crossed the danger mark of 5.5 metre and stood at 6.6 metre at Mathani under Basta block this morning. People residing in low-laying areas are in panic fearing flash flood.

Similarly, the Baitarani river in Bhadrak district is swelling due to  incessant rain for the last two days. The river was flowing at height of 17.56 metre as against the danger mark of 17.83 metre  at Akhuapada  by 6 AM today.

Similarly, people in several parts of Kalahandi district are having a harrowing time due to the low pressure-induced rain. While water level of Hati river is rising, an embankment near Biripur got submerged this morning triggering panic among people in the riparian areas. On the other hand, vehicular communication between Dharamgarh and Bhawanipatna has been disrupted with rain water flooding the roads.

In Brahmagiri area of Puri district, a temporary bamboo bridge over Bhargavi river near Tinikudi village was swept away due to heavy flow of rain water today. As a result, communication between Tinikudi and Balikera has been cut off.

Besides, around 200 families in Dhenkanal town have remained stranded as rain water flooded Ward 16 and Ward 20 as well as Gayatri Nagar in the town.

This apart, Dakapal area in Phulbani of Kandhamal district has been cut off from the outer world while three houses in Nuasahi of Baliguda have been damaged due to heavy downpour. Water level of Salunki river also continues to rise in the district.