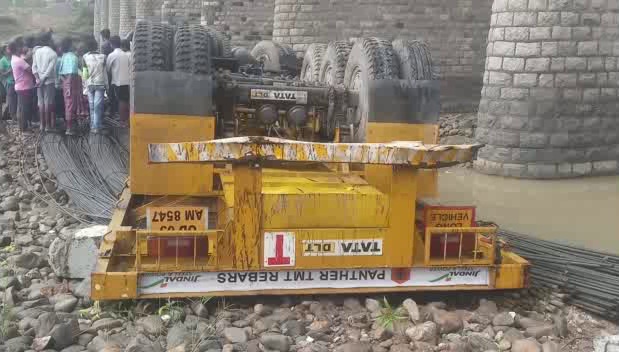 Bargarh: A driver was killed and another person sustained injuries after an iron rod-laden trailer fell off a river bridge on Padampur-Sohela road in Odisha’s Bargarh district early in the morning.

The deceased driver was identified as Anil Kumar Nayak, a resident of Itamati village of Nayagarh district. The person, who was injured in the incident, is the helper of the truck. He is from the same district.

According to reports, the incident occurred at around 5.00 am when the trailer loaded with iron rod enroute to Nuapada from Angul fell off the Anganadi river bridge at Mahulipali on Padmapur-Sohela road in Bargarh district after it lost control.

While the driver died on the spot, the helper was seriously wounded in the mishap. The injured person was rushed to the Padampur Sub-divisional Hospital for treatment.