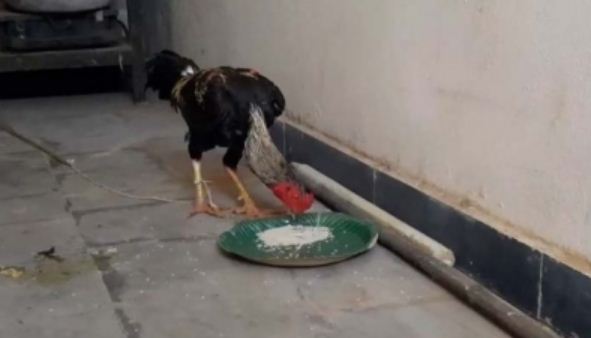 Hyderabad: In a bizarre incident, the police in Telangana’s Jagtial district will produce a rooster in court which accidentally killed its owner.

The knife tied to the leg of the bird accidentally cut into the groin of Thanugulla Satish (45). The incident occurred at Lothunur village on February 22 when the man brought the rooster for an illegal cockfight but it tried to set itself free from his clutches.

Satish was injured when the ‘kodi kathi’, as the knife tied tied to a rooster’s leg for cockfight is called, cut into his groin. The profusely bleeding man was rushed to a hospital, where he was declared brought dead.

As cockfight is banned the state, a group of people had secretly organised cockfight near the Yellamma temple in the village.

After the inquest, the police brought the rooster to the Gollapalli police station, where it was kept and looked after by the police personnel. They also arranged food for it.

Some news channels on Friday reported that the police have ‘arrested’ the rooster, showing visuals of the bird tied at the police station.

The police, however, denied that the rooster was arrested or under police custody.

Gollapalli SHO B. Jeevan clarified that the bird was neither arrested nor detained. He said the police took the responsibility of protecting the rooster and shifted it to a farmhouse.

“We will produce the rooster in court and follow the direction of the judge as to what to do next,” the SHO told IANS.

Cockfights are common in parts of neighbouring Andhra Pradesh during Sankranti. Despite the ban imposed by the courts a few years ago, some people continue to organize cockfights during the festival. Some groups also illegally organise cockfights in parts of Telangana.

In such cockfights, specially-bred roosters are made to fight against each other with small knives or blades tied to their legs. Punters bet lakhs of rupees on the fights which often end with the death of one of the two birds, while a large number of people watch the bloody sport which they consider a part of their tradition.

Rooster to be produced in court