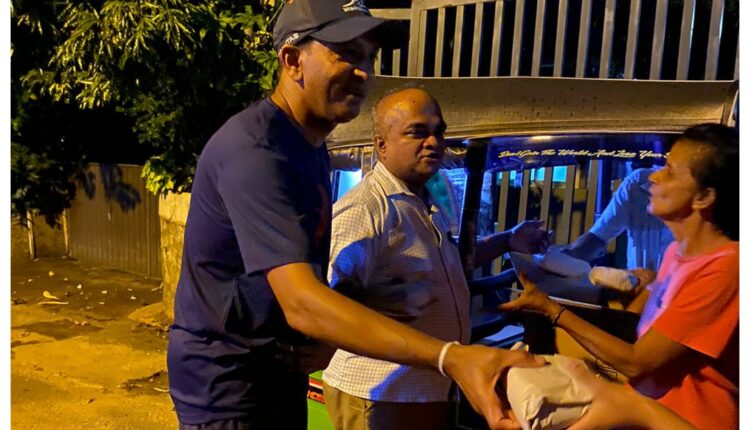 Colombo: Amid economic crisis in Sri Lanka, former cricketer Roshan Mahanama, who is brand ambassador of non-profit organization Community Meal Share, has urged his countrymen to look after each other during the difficult times as he himself was seen serving tea and buns to people waiting in long queues at the petrol station around Ward Place and Wijerama mawatha regions of the island nation.

The economic crisis has led to an acute shortage of essential items like food, medicine, cooking gas and other fuel, toilet paper and even matches.

The nation is struggling to find a foreign exchange to pay for desperately needed fuel imports, and its existing stock of petrol and diesel is projected to run out in a matter of days. While the country is in talks with the International Monetary Fund (IMF) for a bailout package, people are forced to wait in lines lasting hours outside stores to buy fuel and cooking gas.

“We served tea and buns with the team from Community Meal Share this evening for the people at the petrol queues around Ward Place and Wijerama mawatha. The queues are getting longer by the day and there will be many health risks to people staying in queues,” tweeted Mahanama, who was a part of the Sri Lankan cricket team that won the 1996 ODI World Cup along with the pictures of him serving tea and buns to people.

We served tea and buns with the team from Community Meal Share this evening for the people at the petrol queues around Ward Place and Wijerama mawatha.
The queues are getting longer by the day and there will be many health risks to people staying in queues. pic.twitter.com/i0sdr2xptI

Sri Lanka is going through the worst economic crisis since its independence. India has helped its neighbours with thousands of tonnes of diesel and petrol, apart from food and medical supplies, to help ease the acute fuel shortage in the debt-ridden island nation.

In a clip shared by the Australian High Commission in Colombo, pacer Mitchell Starc and batter Steve Smith said they are encouraging friends to ‘assist in any way they can’ in the UN’s appeal for 47.2 million dollars of emergency funds.

The UN has said that 1.7 million people so far in the nation of 22 million are in need of ‘life-saving assistance’, further adding that more than three-quarters of the population have reduced their food intake due to food shortages.

“The UN has launched a flash appeal in Sri Lanka to support poor communities affected by the crisis,” Starc said.

“We are proud that Australia is doing its bit. Together, we can help Sri Lanka hit this crisis for six,” said Smith.

Adoption of clean energy globally is yet to reach significant level