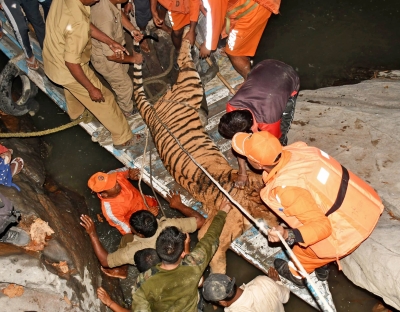 Guwahati:  The Royal Bengal tiger that was spotted at Umananda Island near Guwahati a few days ago has finally got his new home at Nameri National Park in Sonitpur district of Assam.

On December 20, the tiger was spotted between two giant rocks at the foothills of Umananda Island. Before that, some boatmen spotted the tiger swimming in the Brahmaputra river.

Umananda Island, located in the Brahmaputra river, is a popular tourist destination due to a well-known temple.

As per the forest officials, the tiger might have strayed out of Orang National Park on the northern bank of the Brahmaputra river. The national park is at a distance of around 130 km from Umananda Island, where the tiger was finally found.

A forest officer said, “It is tough to exactly say how the tiger traversed the distance, it might have come both through land and river.”

The forest department rescued the Royal Bengal Tiger from Umananda Island, and it was kept under observation at the Assam Zoo in Guwahati for five days.

As the veterinarians found the tiger in good health, it was finally released to Nameri National Park and Tiger Reserve on Sunday as per the instructions of the National Tiger Conservation Authority.

What is Covid variant XBB that accounts for more than 18% of US cases?