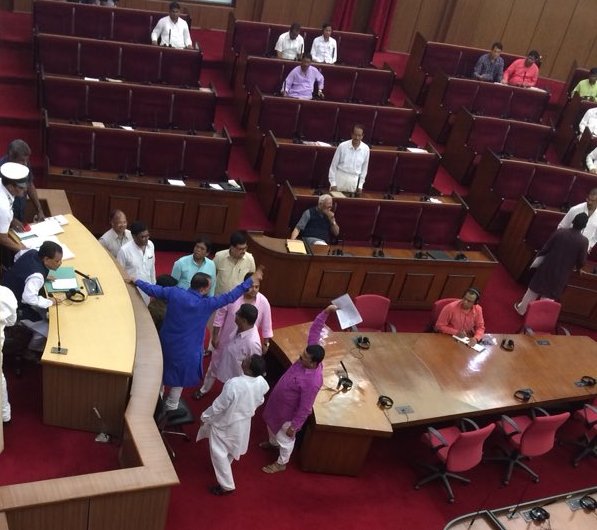 As soon as the House assembled for the day and the Question Hour began, several Congress and BJP legislators rushed to the well of the House and created din protesting various scams alleged by BJD MLA Damodar Rout in his statements to media.

While the Congress members raised the alleged sapling scam, the BJP legislators created pandemonium on the alleged OMFED and cooperative scams.

The Congress MLAs also demanded a statement of the Agriculture Minister in the House over the sapling scam. The BJP members, on the other hand, demanded a CBI probe into the matter and sought the Chief Minister’s intervention.

Amid uproarious scenes, Speaker Pradip Kumar Amat adjourned the Assembly initially till 11.30 AM and later till 3 PM as ruckus prevailed after the House reassembled.

“The Agriculture Minister, in his reply, has admitted about the sapling scam. He should reveal in the House about the persons involved in the corruption,” said Congress Chief Whip Tara Prasad Bahinipati speaking to reporters outside the House.

“No action has been taken till date against those involved in the scams. The Chief Minister should immediately take action in this regard,” said BJP MLA Rabi Narayan Naik outside the House.

Showcause notice to 15 degree colleges in Odisha. Here’s why