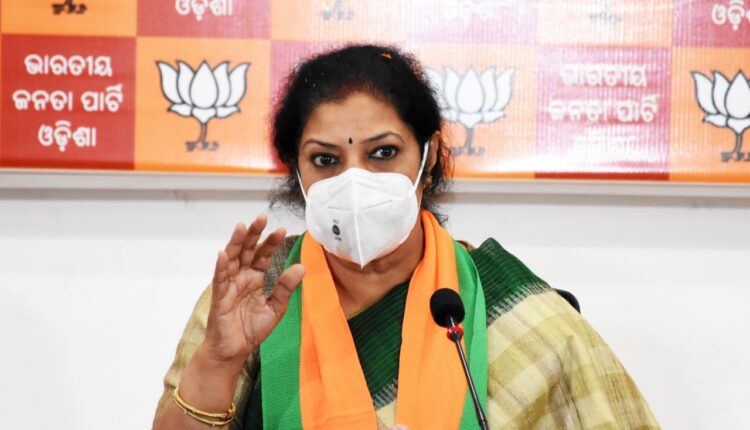 Briefing media at party’s state headquarters in Bhubaneswar, the BJP leader, who is on a 3-day visit to the State, cornered Chief Minister Naveen Patnaik-led BJD government over many issues including KALIA programme and alleged murder of minor girl in Nayagarh district.

She said that the ruling BJD has failed to meet its commitments made during election campaigns.

“In 2014 elections, the BJD had  promised to provide pucca houses to all. The party also won next elections in 2019 by promising same to people of the State. However, the ruling party is yet to convert the kutcha houses into pucca houses in rural areas under housing schemes,”  Purandareswari told reporters.

She criticised the BJD government for not implementing Centre’s Ayushman Bharat Yojana in Odisha.

“Before launch of Ayushman Yojana at Centre, the CM Naveen Patnaik had announced State’s own healthcare scheme Biju Swasthya Kalyan Yojana covering the poor beneficiaries under the programme. Whether the scheme is really benefiting the poor? Not a single person is willing to get registered under the programme,” she said.

At the presser, she asked why CM Naveen did not take initiatives to roll out the Centrally sponsored healthcare scheme in the State.

“Don’t you (Naveen Patnaik) want welfare of poor people of your State? You should answer to them,” the BJP leader said.

“You (Naveen Patnaik) are talking about which governance in the State? Naveen Babu is answerable to these questions,” Purandareswari said.

She condemned the State Government for discontinuation of disbursement of amount under State’s most populous flagship KALIA scheme, which has been merged with the Centre’s PM-Kisan Yojana.

Further attacking the State Government, she alleged that the law and order situation in the State has deteriorated during BJD regime.

“The Government has failed to maintain its law and order in the State. Here, the women are being trafficked and raped. Recently, a 5-year-old girl was killed and her parents attempted self-immolation in front of the State Assembly to get justice. Instead of responding to such incidents with sensitivity, Minister Arun Sahoo is protecting the culprits and Naveen Babu is yet to take any action against him,” she alleged.

She remembered the CM’s statement during election campaign when he had termed 4.50 crore people of Odisha as his children.

“You (Naveen Patnaik) had promised to protect and preserve the people of Odisha like your own children. Humbly, I want to ask you whether the 5-year-old girl, who was murdered, was not among your 4.50 crore children,” she asked.

She said that the bureaucracy is dominating the governance in the State instead of the Government.

“The people of Odisha has voted the BJD to power by keeping faith on Naveen Babu. They have not voted any bureaucrat. This means Naveen Babu should govern the State not the bureaucrats,” she said.

The BJP leader targeted the State Government on chitfund scam and alleged involvement of Pradeep Panigrahi in forgery cases.

“The party is indulged into corruptions during its regime in the State. Expelled BJD MLA Pradeep Panigrahi has been arrested in a forgery case. Even the party’s former Mayurbhanj MP Ramchandra Hansda and two MLAs were arrested in chitfund cases. Minister Ranendra Pratap Swain’s brother is also involved in farm loan scam in Athagarh. The person, who has allegedly killed the minor girl in Nayagarh district, is considered to be a close aide to Minister Arun Sahoo,” she said asking, “Where is good governance?”

Like others, the BJP also wants to come to power in Odisha. But, the party is different from others. While other political parties want power to get privileges, we want to serve people, she added.

Reacting to Purandareswari’s allegations, BJD’s national spokesperson and Rajya Sabha member Sasmit Patra suggested her to speak on farmers related issues particularly hiking the MSP and motivate the State BJP leaders after the party’s defeat in bye-elections to Tirtol and Balasore Assembly seats instead of finding loopholes of the BJD.

In counter allegations, he said, “It seems she is unaware that her own Party’s Dhamnagar MLA Bishnu Sethi misbehaved yesterday with a social activist in a public programme for which she has filed a Police complaint.”

He said that the BJP in the past had undertaken a series of agitations demanding CBI probe into politician Jayaram Pangi’s role in the murder of Itishree Pradhan. After he joined BJP, the party welcomed him and also gave him an election ticket.

He said that the State unit of BJP had not apprised the party in-charge adequately on these shortcomings of the party.

“She is unaware that Odisha was awarded by her Party’s Government in Centre with 5 awards for constructing largest number of houses,” Patra said adding “She has tried her level best to boost the party’s confidence by hoodwinking people and talking lies which won’t cut ice with people of Odisha.”

Odisha to fill up vacant posts in govt high schools