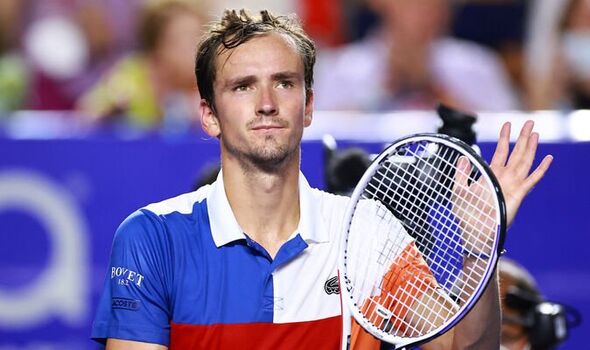 London: Two of Russia’s top-10 tennis players — the soon-to-be world No. 1 Daniil Medvedev and No. 7 Andrey Rublev — have expressed their despair with the Russian invasion of Ukraine, saying that they want peace.

A report on edition.cnn.com said late on Friday that Medvedev, the 2021 US Open champion who is currently playing in the Mexican Open in Acapulco, was “all for peace.”

“At this moment, you understand that tennis sometimes is not that important,” said the 26-year-old Medvedev, who will seek to overcome Spanish stalwart Rafael Nadal’s challenge on Saturday to secure a spot in the Mexican Open final.

“By being a tennis player, I want to promote peace all over the world. We play in so many different countries. I’ve been in so many countries as a junior and as a pro. It’s just not easy to hear all this news,” added Medvedev, who will displace Serbia’s Novak Djokovic when the latest ATP Rankings are released on Monday.

World No. 7 Russian tennis player Andrey Rublev also pleaded for peace, writing, “No war please” on the camera after defeating Hubert Hurkacz of Poland to reach the final of the Dubai Tennis Championships on Friday night.

A day earlier, the 24-year-old Rublev had reportedly explained his stance in an interview.

“In these moments you realise that my match is not important. It’s not about my match, how it affects me. Because what’s happening is much more terrible,” Rublev said. “You realise how important it is to have peace in the world and to respect each other no matter what and to be united… We should take care of our earth and of each other. This is the most important thing.”

Several Russian and Ukrainian athletes in various sports have spoken about the invasion, with Russian football player, Fyodor Smolov, posting a black screen to Instagram, and captioning it, “No to war.” Smolov, who has played 45 times for the national side, also posted a broken heart and a Ukrainian flag.

Russian tennis players Elena Vesnina and Karen Khachanov wrote ‘HET BONHE’ — no war — on Instagram, with the latter including Russian and Ukrainian flags, according to 7news.com.au.

Former top-five tennis player in both singles and doubles, Russia’s Nadia Petrova, also called for peace with an image of a bird perched on a military vehicle.

Meanwhile, Ukrainian tennis player Dayana Yastremska, ranked 120th in the world in singles, is reportedly leaving her country after spending two nights in underground shelters. The 21-year-old posted an image of herself and her sister preparing to leave Ukraine.

“After spending two nights in the underground parking, my parents made a decision at any cost to send me and my little sister out of Ukraine,” the 21-year-old wrote. “Mum, dad, we love you very much, take care of yourself!!! I love you my country! Ukrainians take care of your lives.”

She had earlier written of the “pain and fear” when the invasion had started.