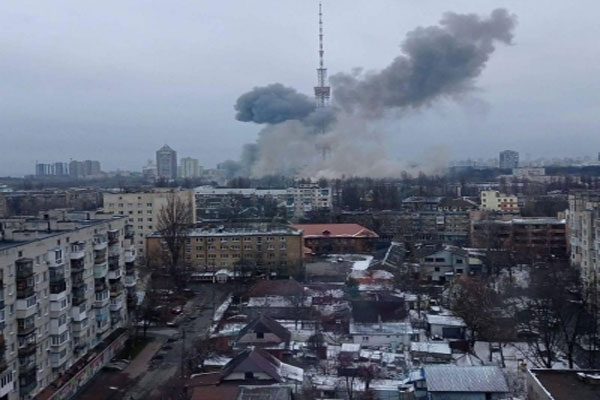 Washington (IANS) : CBS News became the latest media outlet to pull out of Russia after President Vladimir Putin signed a new law that would impose jail terms for “spreading fake news” about the ongoing Moscow-Kiev war.

On Friday, a CBS News spokesperson said that the outlet was “not currently broadcasting from Russia as we monitor the circumstances for our team on the ground given the new media laws passed today”.

Putin on Friday signed the law which would impose prison terms of up to 15 years on people charged with spreading “fake news” about the war in Ukraine, the BBC reported.

The law would, in effect, stop independent reporting in Russia, where news outlets are not allowed to refer to the conflict in Ukraine as a “war”.

Earlier in the day, other major American outlets including CNN, Bloomberg, and ABC News also announced that they were suspending broadcasts from Russia as a result of the war.

A CNN spokesperson said that the network “will stop broadcasting in Russia while we continue to evaluate the situation and our next steps moving forward”.

In a statement, Bloomberg Editor-in-Chief John Micklethwait said the “change to the criminal code, which seems designed to turn any independent reporter into a criminal purely by association, makes it impossible to continue any semblance of normal journalism inside the country”, the Daily Mail reported.

ABC News, which has several correspondents working in Russia, said that “because of the new censorship law passed in Russia today, some Western networks including ABC News, are not broadcasting from the country tonight. We will continue to assess the situation and determine what this means for the safety of our teams on the ground.”

Other global news outlets, including the BBC and CBC News have also suspended operations in Russia.

While CBC News said that it was “very concerned about new legislation passed in Russia, which appears to criminalise independent reporting on the current situation in Ukraine and Russia”, the BBC said it will continue its service in Russian from outside of Russia as the “safety of our staff is paramount and we are not prepared to expose them to the risk of criminal prosecution simply for doing their job”.

Russia wishes to continue dialogue with Ukraine amid war