‘SABARMATI MODEL NOT ENOUGH FOR GANGA’ 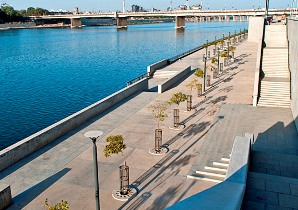 A new ministry to tackle the cleaning of the Ganga may not really change its fate, nor can the “Sabarmati model”, experts say, adding that legislative provisions are needed to ensure that the river’s glory is restored.

While Prime Minister Narendra Modi has laid special emphasis on cleaning the 2,525 km- river, which is deified by millions of Hindus and is part of India’s literature and lore while providing water to over 40 percent of India’s population across 11 states, environmentalists count the large number of dams as one of the biggest problems for the health of the river.

The separate ministry for the Ganga created under Uma Bharti brings hope, but it is yet to come up with a concrete plan.

“Cleaning is not a solution for the Ganga… the three head streams – Bhagirathi, Alaknanda and Mandakini – all have several dams and barrages. This, coupled with higher withdrawal of ground water, results in more river water seeping into the ground. Water extracted through canals also makes the inflow of rivers in the Ganga diminish,” environment scientist and member of National Ganga River Basin Authority (NGRBA) B.D. Tripathi told IANS.

The NGRBA was constituted in 2009 under the chairmanship of then prime minister Manmohan Singh for cleaning the Ganga.

According to Tripathi, several issues concerning river management do not fall within the present legislative framework, such as maintenance of environmental flows, protection of a river basin’s ecology and biodiversity, maintenance of ground water table, consolidation of plans for the diversion of river waters in different stretches, discharge of sewage, obstructions to river flow and loss of connectivity and use of floodplains and active floodplains.

The Ganga River Basin Management Plan (GRBMP), prepared by NGRBA and a consortium of seven IITs recently recommended new legislation and constitutional provisions enabling the establishment of a commission for the management of the Ganga river basin.

“The Ganga is a national river and hence needs national policies. Now that there is an independent ministry, we need to realise that the Ganga has to be managed centrally though a legal framework to ensure that issues related to the river, its flow, and its
basin are addressed uniformly all over the country,” said Tripathi.

While Modi points to Gujarat’s Sabarmati river as an example when he promised to clean up the Ganga, activists say this holds no water for the Ganga.

The Sabarmati is one of Gujarat’s biggest rivers. It originates from the Dhebar lake in the Aravalli range in Rajasthan’s Udaipur district and drains through the Gulf of Khambhat into the Arabian Sea after travelling 371 km in a southwesterly direction. It flows through Gujarat’s capital Gandhinagar and twin town Ahmedabad and has an elaborate river front developed as a prime tourist attraction.

Environmentalists point out that the Sabarmati has not been cleaned. The Narmada water has only been diverted into it, making it appear clean.

“The so-called Sabarmati model won’t work for the Ganga. The Sabarmati has neither been cleaned nor rejuvenated,” environmentalist and coordinator of NGO South Asia Network on Dams, Himanshu Thakkar, told IANS.

“What we see flowing through Sabarmati in Ahmedabad is the water of the Narmada which was supposed to be for the drought-prone areas of Gujarat,” Thakkar added.

On the same lines, convener of NGO Toxics Watch Alliance Gopal Krishna said: “The Gujarat water management model cannot work for the Ganga because it has not worked for even Gujarat… Diverting Narmada water to the Sabarmati is hardly a solution. The Sabarmati river front is an assault on the flood plain of the river.”

Over 2,500 km long, the Ganga flows through one of the most populated regions of the Indo-Gangetic plains, supporting a population of more than 400 million, almost a third of India’s total.

More than Rs.5,000 crore has been spent on cleaning the Ganga in the past 28 years – but with little effect.

In 1974, India first tried to tackle river pollution through the Water Pollution Act. The Ganga Action Plan was launched in 1986 and was in 1994 extended to the Yamuna, Gomti and other tributaries of the Ganga.

The second phase of the Ganga Action Plan was launched in 2000 and NGBRA was created in 2009.

“Despite of all this, the state of the river has not improved but has only worsened. It is not because of lack of finance, infrastructure or technology, but a failure of governance,” Thakkar told IANS.

The activist, however, added that it is not too late if a dedicated effort is made.

“If there is a political will, one simple order to this effect will create wonders. The government should announce that henceforth, no sewage or effluents will be permitted to flow into the Ganga. This will serve the purpose. The culprits will be compelled to look for alternative ways of dealing with sewage and effluents,” he added.

Is BJP fishing in choppy waters of communally sensitive UP?