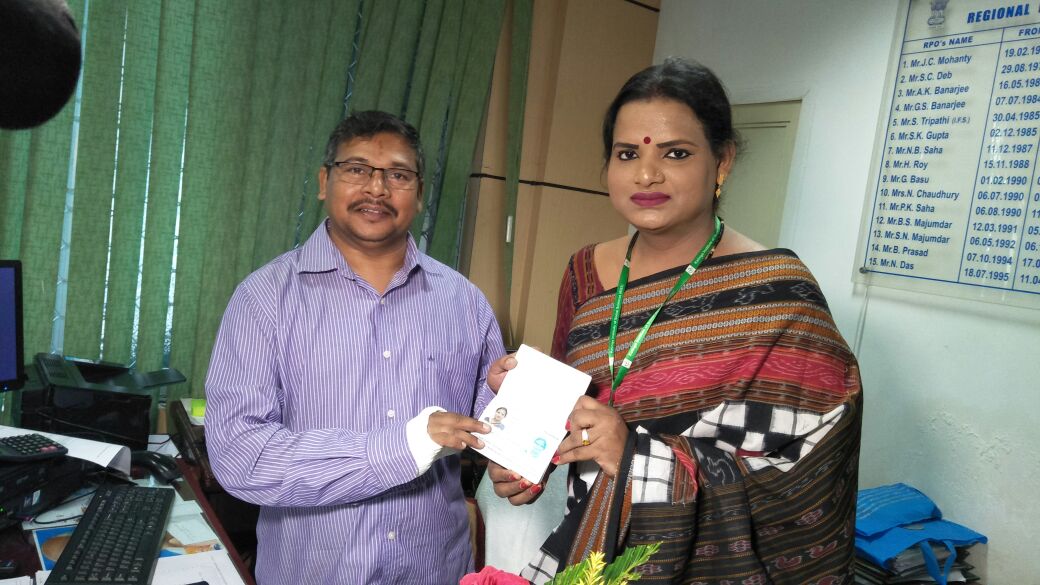 Bhubaneswar: Sadhana Mishra has become the first transgender in the state to be issued a passport. She got it by post today.

Earlier, the passport she possessed identified her as ‘male’ in the sex column, while her photograph depicted her as a female. This posed problems for her at airports and during check-ins.

“Though my previous passport allowed me to travel the world, it neglected a distinct aspect of my identity,” said Sadhana, who is currently working as a Social Development Officer in Kalinga Institute of Social Sciences in an exclusive interview to Odisha Sun Times.

With proper submission of required documents and police verification already conducted for the first passport issued, Sadhana did not have to face obstacles for the re-issue of her second passport and is grateful to Regional Passport Officer Dr. Digvijay Giri for understanding her difficulties and making the process easier for her.

She now proudly flaunts her new passport that enlists her as a transgender and has a ‘T’ in the sex column.

A social activist from Maharashtra reportedly was the first person in the country to be documented as a transgender in the passport in 2015.

In a landmark judgement, the Supreme Court in April 2014 accepted the petition of the long-discriminated-against-transgender community to sanctify them as the third gender and made them eligible for job quotas, welfare schemes and facilities such as voter ID cards, driving licences and paspports that secure their identity.

While the transgender community has been battling for recognition and equality in all walks of life, this comes as a historic step forward for the state.

Sadhana, born into a Brahmin family in Keonjhar district of Odisha, faced a lot of stigma since childhood due to her feminine bent. However, inspite of all odds, she chose to be a woman and gave up her birth name ‘Shyamasunder’. With a Masters degree in Social Work, she has always strived to work for the welfare of the transgender community and other social development issues such as betterment of tribal children.

“I am immemsely elated to be the first person in the state to receive this passport. I hope this sets an example for society to accept us as who we are and respect our choices,” she added.