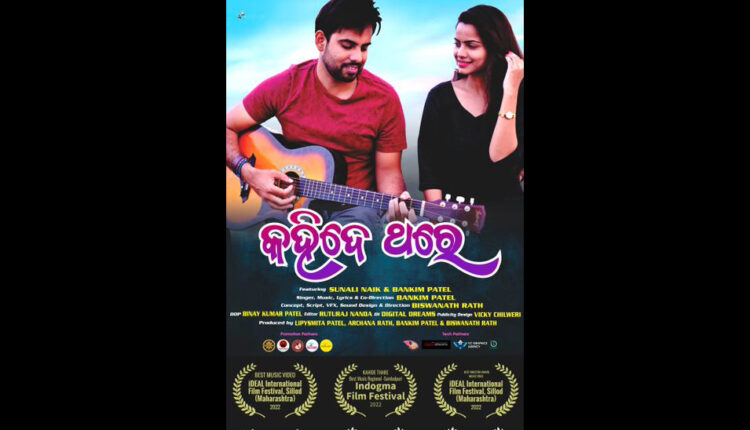 The Sambalpuri romantic musical video is the fourth collaboration between internationally acclaimed writer and director Biswanath Rath and award-winning singer and composer Bankim Patel. Like their previous projects, ‘Kahide Thare’ too has begun its journey of winning awards and bringing glory for Odisha’s music and culture.

Within just three months of its release, the music video has received three awards and six official selections at various international film festivals across the globe.

‘Kahide Thare’ has been produced by Biswanath Rath, Bankim Patel, Lipysmita Patel and Archana Rath. The video has been presented by multi-award-winning film production studio ‘BnR Films’ and Bankim Patel Music. Young and talented singer-composer Bankim Patel has written the lyrics, composed the music and performed in the song. Filmmaker Rath has directed the musical video.

‘Kahide Thare’ was launched on BnR Films’s YouTube Channel, on the auspicious occasion of Nuakhai. The video has already crossed 1,03,000 YouTube views.

In addition, the film has also received ‘official selection’ at PL Music Video Awards (Poland), Lift-Off Filmmakers Session (UK) and Filmyway International Film Festival, Mumbai. In these film fests, ‘Kahide Thare’ will represent Odisha/India and will be screened among other international entries.

Along with the YouTube release, this song has been released on all the major music streaming apps like Gaana, JIO Saavn, Hungama, Spotify, Wynk Music, Apple Music etc.

The CEO of BnR Films Rath said, “We are humbled to receive these awards and recognition from Film Festivals. It’s definitely a very special moment in the journey of this music video. We are overwhelmed with the response the song and the video are getting from audience as well as critic. We express our heartfelt thanks to everyone who has been part of this project.”

“What inspired me to take up ‘Kahide Thare’ was the soothing and soulful music of Bankim which was rooted in Sambalpuri tradition yet felt so modern. Every project has got its own set of challenges. This project was no exception. Originally planned for August 2021 release, the project took almost a year’s time and got completed only in Aug 2022,” the BnR Films chief added.

The documentaries, ad-films, short films, music videos produced by the company have received a total of 366 awards and recognitions in international film festival circuit.