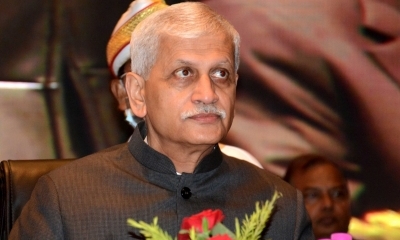 New Delhi: Former Chief Justice of India U.U. Lalit on Sunday said the Supreme Court collegium is perfect and it does not require any fine-tuning.

When queried on recent remarks by Law Minister Kiren Rijiju on Supreme Court collegium who called the system “opaque”, Justice Lalit said: “It is perfect and does not require any fine tuning.”

On the acquittal of the three convicts in the heinous 2012 Chhawla gang rape case in the national capital, Justice Lalit, who demitted office on November 8, said the acquittal of the accused was justified as the court did not find the material good enough to sustain the conviction.

On the aspect of delay in appointment of judges to the Supreme Court and the high courts, he said “a very good Karnataka based senior advocate was recommended but never processed, and his level of patience was breached… it was almost a year”.

Justice Lalit said the lawyer wrote a letter to the collegium and withdrew consent to be a high court judge, and “the system got deprived of one talent”.

He pointed out that the government should not sit endlessly on the recommendations of judges for the appointment in the apex court and high courts, and the entire process of appointment of judges should be time-bound.

On Friday, a two-judge bench of the Supreme Court expressed its strong discontent over delay in appointment of judges by the Centre, saying, “needless to say that unless the bench is adorned by competent lawyers the very concept of rule of law and justice suffers”.

Describing on the functioning of the collegium, he said all collegium members have a say and they have an input and it was because of this we appointed almost 250 judges (in various high courts) in the collegium headed by former CJI N.V. Ramana.

The former CJI, while interacting with media persons at his residence here, said the Supreme Court found the National Judicial Appointment Commission Act (NJAC) to be unconstitutional and if the government attempts to bring in the NJAC again, that is their prerogative. “But so long as that is not brought in, we will have to follow the established mechanism,” he added.

Justice Lalit agreed that the secretariat, established at the Supreme Court as per the NJAC judgment, has to be made functional fully as it would bring in more accountability.

Justice Lalit added that he has no disappointment for not being able to appoint a single judge in the Supreme Court, as the recommendation made by the collegium to elevate Bombay High Court’s Chief Justice Dipankar Dutta in September still remain pending with the Centre.

When queried on uproar against the acquittal of three accused in Chhawla gang rape case, he said only evidence matters before the court and nothing else, and added, “we did not find material good enough to sustain the conviction”.

He elaborated that the circumstantial evidence on the basis of which the accused were convicted was not good enough and the circumstances did not form a complete chain and did not eliminate every hypothesis to prove their guilt.